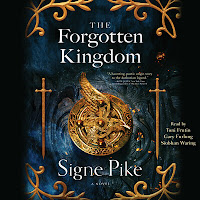 I don't read a lot of fantasy, but I really enjoyed  the first book in Signe Pike's The Lost Queen series. It was this descriptor that initially caught my attention ...."Outlander meets Camelot and The Mists of Avalon for a new generation".
The second book, The Forgotten Kingdom has just released - and I quickly became re-immersed in the story of Languoreth, "a forgotten queen of sixth century Scotland who claims her throne as war looms and her family is scattered to the winds."
Signe has taken a few obscure historical references to an actual sixth century Celtic queen and created an addicting, unputdownable tale of love, honour, duty, fealty, war, intrigue, religion, politics, family - and yes - magic.
The settings are rich with detail. The landscape, castles, kingdoms, lochs, forests and more are easily imagined through Pike's descriptions. The language, customs and beliefs are also an integral part of the story. The time period (AD 573) encompasses the ongoing clash between the Old Ways and Christianity.
Languoreth is still at the heart of the book, but there are many characters, each with a tale to tell. Languoreth's daughter Angharad takes a large role in this latest book. I really enjoyed her story. And she will play a larger role in future entries I am sure. Pike ages her characters as the book progresses and that opens up time for a larger look at not just the characters, but the extensive and encompassing plot Pike has penned. Pike's research is admirable and that input shows in the detail of the book and the richness of the characters.
I chose to listen to The Lost Queen. Toni Frutin had narrated the first book and I was very happy to see she was brought back for this second book. Continuity is so important in a series. Frutin is a fantastic reader. She has a wonderful Scottish accent that is so easy to understand and pleasant to listen to. It immediately embodied the mental image I had created for Languoreth. It's rich and full and her narration is so very, very expressive, capturing all the nuances of Signe's book. As an added bonus two other readers were added to The Lost Kingdom. I do like ensemble casts. It makes for a more immersed listening experience. Gary Furlong provided a voice for the male characters in the book. He too was wonderful - a rich, full accent and a tone that suited and embraced the male roles. Siobhan Waring added much to the telling of this story as well. She too has a rich, expressive tone and has an voice that is pleasant to listen to.
The Forgotten Kingdom makes for wonderful escapist listening. There's more to this story - and I can't wait to listen to the next entry. Hear for yourself - listen to an excerpt of The Forgotten Kingdom.
Posted by Luanne at 7:00 AM