All This Time - Mikki Daughtry and Rachael Lippincott 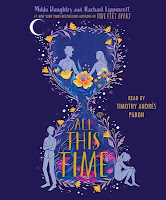 All This Time is the newly released YA novel from Mikki Daughtry and Rachael Lippincott, authors of the New York Times Bestseller, Five Feet Apart. I really enjoyed Five Feet Apart and happily picked up this newest collaboration. (Isn't that cover gorgeous?)
Kyle and Kimberley have dated all through high school. But the night of grad, they argue while in the car....and yes, there's an accident. When Kyle wakes up in hospital, he learns that Kim didn't make it. And he feels like no one can understand his grief - until he meets Marley. She too has suffered the loss of a loved one.
The book is told solely through Kyle's voice - memories, hopes, dreams, sorrows and more. Daughtry and Lippincott have created quite an emotional lead character, one who loves love. That pursuit seems to drive his life. The word obsessed did pop into my thoughts. Now that being said, I did initially enjoy the back and forth, yes, no, maybe so of Marley and Kyle. But after a bit, I found Kyle's intensity somewhat off putting. His determination to have Marley to feel the same was a bit off putting. The same intent and emotions are repeated over numerous chapters. And I grew a bit weary. I wanted something more to happen. It did - there's a twist about two hours from the end of the book. It's a device often used, but it worked and my interest was caught up again. I did like how things ended.
Daughtry and Lippincott do a good job depicting grief and I'm sure everyone can identify with some of the emotions depicted.
I chose to listen to All This Time. The narrator was Tim Andrés Pabon, an new-to-me reader. He was a great choice for this story. I absolutely believed that a high school senior was talking and his voice matched the mental image I had created for Kyle. His voice had a nice soft tone to it that easily caught the emotion of the character. His reading was clear, easy to understand and pleasant to listen to. Hear for yourself - listen to an excerpt of All This Time.
A good listen, but not as good as Five Feet Apart in my opinion.
Posted by Luanne at 7:00 AM