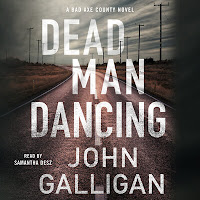 Dead Man Dancing is John Galligan's follow up to last year's intro to Bad Axe County - and Sheriff Heidi Kick. If you're a 'grit-lit' fan, you're going to enjoy this series.

The underbelly of Bad Axe County is a scary place. Kick is determined to clean up the town, but she's got her work cut out. White supremacists think the town is just ripe for their attention - as do a number of the residents. Beatings of migrant workers and the murder of a local author have Heidi working twenty four seven. And then her husband Harley goes missing...

Galligan's prose are definitely dark and gritty. The book hums with undercurrents of hate and danger that are not just an author's imaginings. Instead they are real and present day events.

Heidi doesn't hesitate to wade into the fray. I think bad a** when I think of Sheriff Kick. Her calm approach is much more effective as she tries to deal with the corruption in the department and the lack of support from the town council in addition to the crime. Now, that's not to say she's a pushover. Far from it.

Neon, a young Black man is in Bad Axe County tracing his ancestry. He is given a voice in the book as well. His timeline runs parallel to Heidi's investigation - and the listener can only hope what might happen - doesn't.

The plotting is very good. There's a lot going on and I wondered how things would tie in together by the end. The reader is privy to more information than the Sheriff and can only hope she puts the pieces together before it's too late.

Bad Axe County isn't somewhere I'd stop - to me, it says keep on driving. But.....I'll be back for the next entry in this series for sure!

I chose to listen to Dead Man Dancing. Much of that is down to the reader.  Samantha Desz read the first book and this follow up. I appreciate the continuity. Desz's voice is perfect for this character. It has a nice gravelly tone, is clear and is easy to understand. Her tone completely matched the mental image I've created for Heidi. She rarely raises her voice which is right for this character. The calm way of speaking belies her determination. It's well paced, never rushed and perfectly modulated. The voices employed for other characters are really good as well, especially the 'baddies'. Hear for yourself - listen to an excerpt of Dead Man Dancing.

Gentle listeners - this one may not be for you - there are a number of trigger situations.
Posted by Luanne at 7:00 AM

Ooh this one sounds good! Adding the first book to my TBR

Def read the first one! I look forward to what you think!