The Deepest South of All - Richard Grant 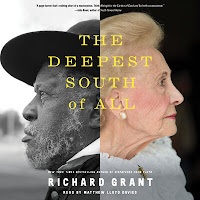 I love fiction, but honestly, the non fiction titles are the ones that stay with me the longest. I've enjoyed previous works from Richard Grant and was quite excited to listen to his latest - The Deepest South of All: True Stories from Natchez, Mississippi.
Grant has been described as a travel writer, but I think I think his writing encompasses more than just the physical. His locales are explored through the inhabitants - their history and stories. More of a sociological feel if you will. A transplanted Londoner, Grant makes his home now in Mississippi.
"Natchez, Mississippi, once had more millionaires per capita than anywhere else in America, and its wealth was built on slavery and cotton. Today it has the greatest concentration of antebellum mansions in the South, and a culture full of unexpected contradictions."
Grant introduces us to many of the citizens he meets at a party in the first few chapters. Eccentric is a descriptor that can be used many times in this book. Many of the residents seem so quirky as to be fictional - but they're not. Much of the modern day Natchez is told through the 'war' of the two garden clubs - and their yearly ritual celebration of Natchez history. It's an over the top historical presentation that glosses over the fact that Natchez was the second-largest slave market in the US, second only to New Orleans. The antebellum mansions play a large part in depicting the selective history. Author Greg Iles is referenced as trying to make changes in this long held tradition. And the contradictions mentioned are definitely there - Natchez's mayor is a gay black man who garnered ninety one percent of the vote to take office. Yet, there isn't a black member in either garden club and black history is not presented in the  'Tableaux'. Grant meets and interviews both black and white inhabitants of Natchez and gives the listener a broader picture of this complicated city through their thoughts and history.
Told in alternating chapters with the current time, is the story of one slave - Abd al Rahman Ibrahima, a West African prince sold into slavery in the late 1700's. His story is heartbreaking, but fascinating. And his story is just one of millions.
The Deepest South of All juxtaposes the history and current day climate of Natchez, providing a look inside this enigmatic and yes, insular city.
Grant's writing is always a treat to read. But, I did choose to listen to this latest. The reader was Matthew Lloyd Davies. His performance was excellent and he interpreted Grant's work really well. He has a British accent (remember, Grant is British) that is charming and easy to understand. His voice is quite versatile - he presented many characters and each was a different and believable voice. His reading has movement and he captured the emotions and tenor of the book.
Curious, quirky, fascinating and most definitely thought provoking. The Deepest South of All makes for timely reading and listening.  Listen to an excerpt of The Deepest South of All.
Posted by Luanne at 7:00 AM