His & Hers - Alice Feeney 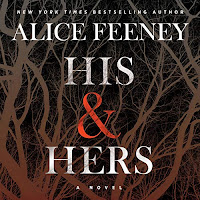 If you like clever plotting, you're going to want to pick up a book by Alice Feeney. Now, her first two novels have been great - but this latest - His & Hers is fantastic!

"There are two sides to every story: yours and mine, ours and theirs, His & Hers. Which means someone is always lying." And you will be hard pressed to know who is lying in this intricately plotted suspense novel!

Hers - Anna Andrews is a news reporter. When a body is found in the village of Blackdown, Anna is sent to cover the story. She has no choice, despite her reluctance to set foot in the village again.

His - Detective Jack Wallace is on the case as well. In more ways than one - investigator and possible suspect.

Unknown - creepy missives from an unknown player add to the story....

Oh boy, I can't tell you how much I loved this book. My favorite genre is mystery and I fancy myself to be a bit of an armchair detective. But, I did not see the ending at all. Do not, I repeat do not cheat and read/listen to the last chapters out of order. That will absolutely spoil what is a massive gotcha!

One of my favorite storytelling styles is the back and forth from alternating narratives. As readers, we end up knowing much more than each character does. But who is telling the truth? Feeney happily led me down the garden path more than once. There are numerous characters who could be the culprit.

And I won't say much more - suffice to say it's an addictive read/listen! Those who enjoy psychological suspense are going to want to pick up His & Hers.

I did listen to His & Hers. I often find myself more immersed in books by choosing the audio version. Such was the case with this book. The two readers - Richard Armitage and Stephanie Racine - are both excellent and I've enjoyed their narration in the past. Listen to an excerpt of His & Hers.
Posted by Luanne at 7:00 AM

Sadly the book is archived on Netgalley as first thing I did was rush there! Will be making a note of this author. Thanks for the review.

Oh drat Mystica.....yes, definitely add her to your list!

Oh I'm so happy to see you enjoyed this one. I enjoyed her last book up until the big reveal at the end, so I've been on the fence about reading more from her.

I didn't read the last one! This was was quite twisty, so right up my alley.