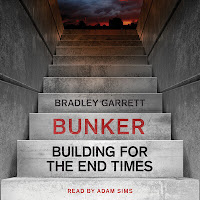 Well, this is one for the times isn't it? Bradley Garrett actually started writing Bunker: Building For The End Times before Covid 19 hit, but finished it during the pandemic.

Pandemic. Apocalypse. Social breakdown. Political anarchy. What will you do or think you can do, to keep you and your loved ones safe? Are you prepped for any emergency? Many are - in many different ways. Here's a fact for you - in the US alone, 3.7 million Americans call themselves preppers.

Garrett takes us across the world exploring bunkers, bunker communities, preppers, bug out plans, kits and vehicles, conventions, and so much more. I was quite frankly astounded at the number of people and the lengths they are going to feel ready. The level of preparedness runs the gamut from extra groceries to full on in the ground communities.

Garrett meets with those who are selling safety, recounts the history of prepping, explores sites, and so much more. Garrett has an impressive background and it shows - the book is thoroughly researched and very well written.

There's lots of food for thought here - especially in these times. I do know one person who identifies as a prepper. They have goods for at least a year and a bug out plan. Who's to say what's going to be needed? Those that can afford it will certainly be at the head of the line. I was astounded by the dollar figures being floated. And based solely on some of the interviews included, there are many in the bunker community that I would say have some mental health issues.

Bunker was really interesting to listen to - informative and thought provoking.

I chose to listen to Bunker. Initially I thought the author would be the reader, but it was instead award winning narrator Adam Sims. His voice has a nice edge to it and I thought it suited the subject of the book really well. He captures the emotions and nuances of the work. His voice is clear, easy to understand and pleasant to listen to. Hear for yourself - listen to an audio excerpt of Bunker.
Posted by Luanne at 7:00 AM

This is such an interesting topic, especially with everything happening in our world today!

Absolutely - I wonder how full the bunkers are now....