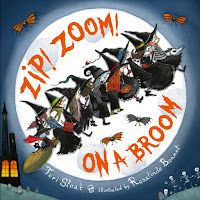 Zip! Zoom! On a Broom by Teri Sloat is the latest in the Gramma and Little Guy reads.

Little Guy knows what Hallowe'en is and immediately labeled the book as a Hallowe'en read from the witches on the cover. We had to look at the witches's faces before opening the book and he found some of them to be 'mean.' Onward to the inside.....

Zip! Zoom! On a Broom is specifically a Hallowe'en themed counting book. Ten witches end up packed onto a broom - we count up as they appear and down as they leave the broom.

The prose are in rhymes that allows the reader to achieve a nice rhythm. But there are a few that seem somewhat stilted and forced and just not quite 'there'. "Seven spiral through a cloud. One witch whirls off, shrieks out loud!" Some of the words used are perhaps a bit above the reading level of those who would pick up this book - incant and plummet definitely are. Those that would perhaps understand those words are beyond counting to ten.

We'll try this one again later, but both Gramma and Little Guy can only give it a middle of the road rating - *** - right now.
Posted by Luanne at 7:00 AM

Aw, it sounded so cute - too bad it was a disappointment.