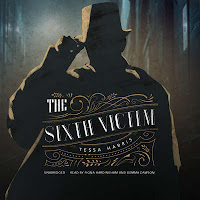 Tessa Harris's latest historical mystery is The Sixth Victim  - this is the first book in her new Constance Piper series.

Harris sets her novel in a time a place that I love to read - London, England's East End in the 1880's. 1888 to be exact - the time frame that Jack the Ripper was making himself known.

Flower seller Constance Piper has tried to better herself, learning to read and write with the help of Miss Emily Tindall. But when Emily goes missing, Constance cannot believe she would leave without saying good-bye. As Jack's kills start to populate Whitechapel, Constance is frightened that an unidentified corpse may be that of her beloved teacher. And a high-born lady fears it may be her sister. Who could this unknown victim be? Teacher, sister or another of Jack's victims - the sixth?

Harris's historical detail is well researched. Her descriptions, language and settings immediately drew me into the past - the dirty streets, the social strata and the fear of that time period.

Clairvoyance is all the rage in Victorian England and Constance seems to have the sight. Although based in fact, this is where the story fell down for me. I loved the mystery, the possibilities and the characters. Constance is a wonderful lead. But I'm just not sure I bought into the paranormal aspect that Harris introduces. While it is a driving part of the story, I would have been just as happy without it.

I chose to listen to this book. There were two readers - Fiona Hardingham  and Gemma Dawson. I really like more than one narrator - it feels like more of a production if you will. Hardingham and Dawson were fantastic. Their British accents ranged from educated and posh to the streets of Whitechapel. Realistic and so believable. And easy to listen to and understand. I'm not sure which actress voiced Constance, but the voice immediately created a vibrant picture of the character.

Harris has penned an unusual mystery and a strong lead off in this new series. Listen to an excerpt of The Sixth Victim.
Posted by Luanne at 6:59 AM