I Am Death - Chris Carter 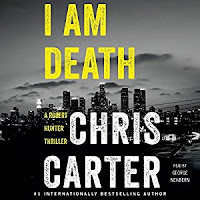 I Am Death is the seventh book in Chris Carter's  Robert Hunter thriller series, but it was a first read/listen of this author for me. It won't be my last!

Hunter is the lead detective in the LAPD’s Ultra Violent Crimes Unit. His partner is Detective Carlos Garcia. They're an excellent pair of protagonists with two very different personalities. Hunter is the more 'brainy' of the two, completely focused on work. Garcia has a family and and can see that there is something to life besides work. They play off each other well.

They are called to investigate the case of a young woman missing for a week, murdered and then left displayed for the cops to find. Her autopsy reveals she was tortured and the killer has left additional clues on her body. He proclaims that "I Am Death." Then there's another killing and it seems that the murderer is directly taunting Hunter to try and catch him. I enjoyed solving the crime along with Hunter and Garcia, urging them to hurry up and catch this monster.  I have to say, the ending was a wonderful gotcha!

Carter's killer is a chilling character - his stalking and insinuation into the lives of his victims is truly frightening. Carter himself studied and worked as a psychologist with a specialization in criminal behaviour and that knowledge adds much to his plotting and characterizations.

Although this is part of a series, I was able to easily get up to speed with this pair. This could easily be read as a stand alone. But, this listener will be tracking down Carter's backlist as I quite enjoyed this duo. Gentle readers please note that there is some fairly graphic violence and disturbing situations in this book, so it's not for the faint at heart.

I chose to listen to I Am Death. The reader was George Newbern. He has a crisp, clean voice that is quite expressive. He provides believable and easily distinguished different voices for the different characters. But, I have to say that his matter of fact tone for the killer's voice was very chilling and gave me goosebumps!

Listen to an excerpt of I Am Death. Or if you prefer, read an excerpt. You can connect with Chris Carter on his website and like him on Facebook
Posted by Luanne at 7:00 AM

Newbern is a great narrator. This sounds terrific!