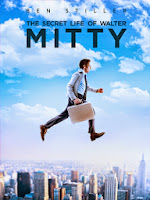 Do you remember reading James Thurber's short story The Secret Life of Walter Mitty ? Thurber wrote it in 1939. It's a delightfully droll story of a man who daydreams constantly of a life bigger than the one he's leading. He imagines himself as the hero, the savior, the one who can save the day.....and then he's dropped back into his humdrum life by the voice of reason - his wife.

Well, Ben Stiller has brought that little story to the big screen - directing, producing and starring in the movie version of The Secret Life of Walter Mitty. It's available now to download in Digital HD format from Twentieth Century Fox Home Entertainment. You can download from your choice of sources - I used Google Play. Downloading films is something I've just started doing. The Digital HD format allows viewing on devices you can also read books on. For me that's my Ipad - it pretty much goes wherever I do, so I can always entertain myself! (And watch more than once!) I can watch on any and all of my devices, including our gaming system and computer. I was surprised to find that the Digital HD version came out 2 weeks before the Blu-ray and Dvd versions. (They're due out April 15 - Make sure you scroll to the bottom for a chance to win a Blu-ray copy!)

I'm always hesitant when a book is turned into a movie or when a classic show is redone. Will they stay true to the original? If it's different, is it within reason? Will I enjoy it? Well in this case the answer is yes, I did enjoy it. And yes, it's a bit different from the original. But I like Stiller's additions. After all, the short story only gave us a wee glimpse of Walther and his secret life. In the modern day version, Walter is not married, but is living a small, quiet life. He wants more - and he frequently 'zones out' imagining what he wants to do, be and have. The turning point comes when a negative of the last cover of Life Magazine is lost. This is Walter's job and he takes it seriously. He spontaneously embarks on a journey to find that photographer (Sean Penn) and 'frame 25'.

I really enjoyed The Secret Life of Walter Mitty. There's that rom/com will they, won't they element(Kristen Wiggplays Walter's crush Cheryl). Stiller plays a wonderful character - it's impossible not to feel for Walter when he's treated badly or faces another disappointment. And just as hard to not cheer him on when he decides to "Let Life In". His imaginary situations become reality and it kinda makes you want to be on the trip with him. Part of the film was shot in Iceland and some in British Columbia - the scenery is absolutely magnificent. Enter to win a trip to Iceland - Let Life In. #LetLifeIn You can find Walter Mitty on Facebook and on Twitter, on Tumblr and Instagram.