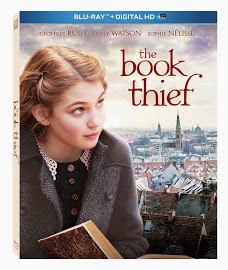 I look forward to seeing movie adaptions of books I've enjoyed. But there's always the question of comparison. Will the movie measure up to a beloved book?

The Book Thief is newly released on DVD and Blu-ray from Twentieth Century Fox Home Entertainment.

Director Brian Percival had a challenge on his hands to bring Marcus Zusak's bestselling The Book Thief' to the big screen. My opinion? He did a great job.

For those who haven't read the book (and why haven't you!?) The Book Thief is the story of foster child Liesel, who lives in Nazi Germany in 1939. When she arrives at her new home, she cannot read. But she learns with the help of her new father. Her love of books grows as her things around her deteriorate. She 'borrows' books from a wealthy couple's library to share with her neighbours - and the Jewish man hidden in her basement.

There are some differences, (a few less characters and a few things happen in a different manner) but for me, there were no major ones that detracted from Zuzak's original story.

I thought that Sophie Nélisse was wonderful as Liesel.  Performances by Geoffrey Rush and Emily Watson, as Liesel's parents, were just as standout. Their presentation  fit the mental images I had created of the character.

I knew the story going in - and the end - but I was captured from the first scene to the last. The Book Thief movie let me experience this wonderful tale all over again. And I cried all over again - so fair warning, have your tissues ready. Very well done in my opinion.

I haven't read the book yet but I dearly loved the movie.

I really want to see this movie - although it looks like they've chosen to omit Death as the narrator???

No Bookworm! Death is still the narrator. But the Hubermanns do not have any children at all in the movie.