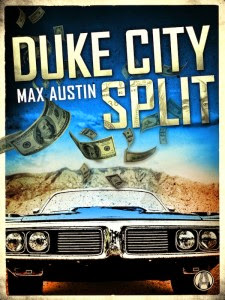 I admit to having a fondness for 'heist' tales - movies and books. So I was drawn to Max Austin's (a nom de plume of Steve Brewer) new eBook Duke City Split.

Bud Knox is a stay at home dad to his two girls while his wife works as a real estate agent. But over the last fifteen years, Bud has supplemented their household income.....by robbing banks. He and his partner Mick are careful and cautious about the jobs they do. Until the day Mick suggests a job worth millions. But it's local - and can they trust the kid who brought the idea to them?

And because it's a heist tale - you just know things aren't going to go smoothly......

Austin throws in lots of hurdles for out intrepid pair - the Mob, the FBI, crooked guards - and that inexperienced third partner. As is the case with caper tales, I found myself rooting for Bud and Mick to 'get away with it'.

Austin has created a likable duo with Bud and Mick. They're polar opposites, but both have redeeming qualities. Mick is the physical one out of the pair, ready with his fists or a gun. Bud, not so much. But they are fiercely loyal to each other. The relationship between Bud and his wife was surprisingly portrayed, with lots of sharing and caring - not quite what I had expected. Of the two, I found myself drawn to Bud.

Duke City Split was a fun, quick (255 pages) read that moved quickly. And I can absolutely it on the screen. Austin says this is the first in a planned trilogy, with Duke City Hit, coming out next December.

To See what others on the TLC book tour thought. Full schedule can be found here. And Random House has put together a great giveaway as well. A Grand Prize of a $30 egiftcard to the eBook retailer of the winner's choice, and a First Prize Mystery Prize Pack of mystery paperbacks from Random House: The Alpine Xanadu, Dying for Chocolate and A Bat in the Belfry.


a Rafflecopter giveaway
Posted by Luanne at 6:30 AM

Thanks so much for the kind words about DUKE CITY SPLIT! Hope everyone enjoys reading it as much as I enjoyed writing it.

This DOES sound like it would make a great movie. I know I'd want to see it!