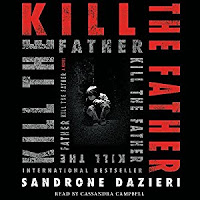 When a woman is beheaded in Rome and her six year old son taken, the major crimes Chief calls in an unexpected duo to secretly track the killer and find the boy. Deputy Captain Colomba Caselli is still recovering from her last case or catastrophe, depending on your viewpoint. She is joined Dante Torre, a man who spent his childhood trapped inside a concrete silo fed by the gloved hand of a masked kidnapper who called himself 'the Father'. He escaped but has been irreparably damaged by his horrific ordeal.

I thought this was an excellent premise. The two leads were well drawn and I am always attracted to the 'walking wounded' protagonists. Kill the Father is listed as the first book in the Columba Caselli series. So, a great introduction to this character and her back story. Torre is of course, horribly affected by his ordeal as a child, but I found that his reactions to situations etc. became somewhat repetitive as they were described over and over again.

The plot is intricate and complex, but I found it started to drag over the course of the 500+ pages and I found my attention wandering.

I chose to listen to Kill the Father. I do find when I read a book vs. listening to it, that it's a different experience. Repetitive descriptions that I may have glossed over in physical book format are more pronounced in audio. The character seem more 'real' when they have an actual voice.

The reader of Kill the Father was Cassandra Campbell - one of my favourite audio book presenters. Her performance was excellent. She has such a smooth voice that is so pleasant to listen to. There's a melodic undertone that makes her voice sound so polished and effortless. I liked her interpretation of the Columba character. It fit the mental image I had created for the character. Her pacing of the narrative is good, as are the inflections she gives to dialogue and action. She handles the Italian phrases used in the book admirably. Listen to an excerpt of Kill the Father.