- You can't judge a book by its cover - which is very true.
But you can like one cover version better than another...

Recipe for A Perfect Wife by Karma Brown just released in December 2019. It was on my wish list, but I didn't manage to snag a review copy. It looks like an interesting read. The US hard copy cover is on the left and the US kindle cover is on the right. Hmm, pretty similar eh? Why the choice to hide the image I wonder? Yes, you can tell its a 50's housewife behind those labels. Maybe to convey something 'covered up'? Personally I like the uncovered kindle image much better. I like the image and find the font and colors grab me more. So, Kindle is my choice this week. Have you read this title yet?
Any plans to? Which cover do you prefer?
You Can't Judge A Book By Its Cover is a regular feature at A Bookworm's World.
Posted by Luanne at 7:00 AM 3 comments:

Email ThisBlogThis!Share to TwitterShare to FacebookShare to Pinterest
Labels: You Can't Judge A Book By Its Cover

Yes, my usual fare is mystery and suspense, but I like to step away and read something completely different every so often. The Ten Thousand Doors of January by Alix E. Harrow was my latest read - a foray into fantasy.

1900. January lives with her guardian in a sprawling mansion filled with treasures, oddities and more. Her father works for Mr. Locke, travelling the world looking for the unusual. Mr. Locke seems to view January as one of those unusual finds. January often explores forgotten rooms and comes across an unusual book one day. A book that speaks of other worlds, wonders, love and adventure. And all you have to do is find.....the doors that lead to those other worlds.

I loved this premise! Who hasn't wondered about unseen and unknown worlds just waiting to be found. Having to find a door was the perfect key. I couldn't wait to see what Harrow had imagined. And what January might find.

What I found was a magical tale that took me on a wondrous adventure with surprises around every corner - and through every door. The writing is beautiful and the pacing is measured. I quite enjoyed stepping out of my comfort zone.
Posted by Luanne at 7:00 AM 2 comments: 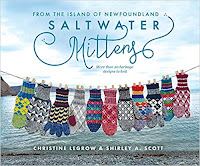 What book caught my eye this week as it passed over the library counter and under my scanner? It was the picture that caught my eye. But, you'd most definitely need mittens in Newfoundland this past week!

Saltwater Mittens: From the Island of Newfoundland, More Than 20 Heritage Designs to Knit by Christine LeGrow and Shirley Anne Scott.

From the publisher, Boulder Publications:

"Woolen mittens have long been a Newfoundlander’s best friend. The warmer the better. In a quirky climate of freeze, thaw, blow, and drizzle, good mittens made all tasks easier—to split birch, hammer a nail, gut a fish, draw and haul water, hang clothes on a line, shoot a seabird, or snare a rabbit. Social life, too, always required the finest mittens and gloves. This continues today."

(Over the Counter is a regular feature at A Bookworm's World. I've sadly come the realization that I cannot physically read every book that catches my interest as it crosses over my counter at the library. But...I can mention them and maybe one of them will catch your eye as well. See if your local library has them on their shelves!)
Posted by Luanne at 7:00 AM No comments:

Giveaway - The Wife Before Me - Laura Elliot

Calling all suspense readers! I've got a great giveaway for you today! Laura Elliot's latest North American release is The Wife Before Me.....and I have a copy to giveaway to one lucky reader!

What's it about? From Grand Central Publishing:

"One evening as the sun is setting, Amelia Madison’s car slides into the sea off Mason’s Pier. Her body is never found.

Two years later, Elena Langdon meets Nicholas Madison. She is grieving the loss of her mother, he is grieving for his wife. Together they can help each other. Now Elena is living with Nicholas. But Elena doesn’t really know him. She doesn’t know what he is capable of.

And she doesn’t know what really happened to Amelia. Until the day she discovers the torn page of a letter and the words she reads chill her to the bone. Elena must find the person who wrote these letters if she is to save herself.

A totally breathtaking page-turner about the darker side of love and what really goes on behind closed doors. This book will have you gripped from the very first page until the dramatic final twist." Read an excerpt of The Wife Before Me.

Laura Elliot was born in Dublin, Ireland. She lives in Malahide, a picturesque, coastal town on the north side of Dublin.

Writing as June Considine, she has twelve books for children and young adults. Her short stories have appeared in a number of teenage anthologies and have also been broadcast on the radio. She has also worked as a journalist and magazine editor.

If you'd like to read The Wife Before Me, enter for a chance to win a copy using the Rafflecopter form below. Open to US and Canada, no PO boxes please. Ends February 1/20.

a Rafflecopter giveaway
Posted by Luanne at 7:00 AM 6 comments:

- You can't judge a book by its cover - which is very true.
But you can like one cover version better than another...

I quite enjoyed Emily St. John Mandel's Station Eleven. I was excited to see that she has a new book coming out. The Glass Hotel releases this Spring. The US cover is on the left and the Canadian cover is on the right. Two very different looks. Water figures into both. The Canadian cover image depicts the journey (boat) and the stars. It's quite stark. The US cover seems to depict the destination. I like the look of that misty, mysterious wee island. I'm going to go with the US cover this week. What about you? Which cover do you prefer? Any plans to read The Glass Hotel?
You Can't Judge A Book By Its Cover is a regular feature at A Bookworm's World.
Posted by Luanne at 7:00 AM 6 comments:

Email ThisBlogThis!Share to TwitterShare to FacebookShare to Pinterest
Labels: You Can't Judge A Book By Its Cover 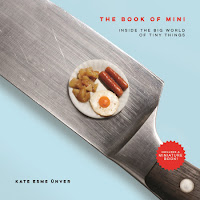 What book caught my eye this week as it passed over the library counter and under my scanner? I have always been fascinated with 'little' things...

The Book of Minis: Inside the Big World of Tiny Things by Kate Esme Unver.

From Black Dog and Leventhal:

"Embrace the not-so-small world of minis–and your own tiny book!

From teeny burgers and minuscule handbags to furniture no larger than a quarter, this mind-blowing collection of squeal-worthy miniatures features more than 250 of the tiniest creations from all over the world.

Kate Ünver, a lifelong collector of nearly 1,000 items, has curated unique and extraordinary miniatures on her Instagram account, @dailymini, since 2012. In The Book of Mini, she selects hundreds of pieces of artwork–many of which have never been seen before–and organizes them into sections on tiny food, diminutive wildlife, petite pottery, and more. Also included are interviews with collectors and artists exploring their methods, influences, and how they came to adore everything mini.

Featuring hundreds of photographs and a collectible miniature book, The Book of Mini is a must-have book for the tiny lover in your life."

(Over the Counter is a regular feature at A Bookworm's World. I've sadly come the realization that I cannot physically read every book that catches my interest as it crosses over my counter at the library. But...I can mention them and maybe one of them will catch your eye as well. See if your local library has them on their shelves!)
Posted by Luanne at 7:00 AM 1 comment:

I stumbled across Alex Marwood's writing back in 2013 with her debut and Edgar Award winning novel, The Wicked Girls. (my review) I've been hooked ever since. Each of her novels has been completely different, unexpected and addicting. Her latest is The Poison Garden - and it too was a story I couldn't predict.

Romy was a toddler when her mother moved them to The Ark, a cult who is waiting and prepping for the end of the world. (Marwood does a great job of world-building with the cult.) They know they will be saved. As we find out from the first chapter, the end of the world comes - for The Ark. Romy is thrust back into the 'world of the dead' as The Ark referred to the outside world. She has to learn how to adapt to this world - and the family her mother left behind.

Marwood tells Romy's story in a past and present timeline. We learn about the cult/commune before the downfall - the pracitces and beliefs, the members and what led up to the the demise of The Ark. But how did Romy survive? We're with Romy from her first day back in the 'real world'. Those time lines progress until they ultimately meet. I love this method of storytelling. The back and forth had me up late, needing to know what is happening on each side of that final resolution and reading 'just one more' chapter.

Marwood kept me on my toes - there was no way to predict where this story was going to go. I so appreciate being surprised by a plot. Marwood's prose flow easily. And as before, I didn't see the ending coming. It finished the book, but left some nice little what-ifs to keep the reader wondering.

Alex Marwood is a pseudonym for a London journalist and her books have a gritty, authentic feel to them. The Poison Garden was another dark and delicious read. Here's an excerpt of The Poison Garden.
Posted by Luanne at 7:00 AM 3 comments: