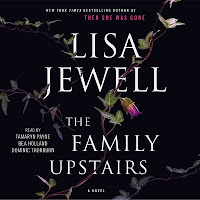 On her twenty fifth birthday Libby Jones receives an unexpected letter from a lawyer. She learns her birth name and is stunned to find out she has inherited a Chelsea home worth millions. Desperate for answers to her past, she visits the home and discovers it has been abandoned for years. But perhaps not....there are others who have been waiting for Libby to turn twenty five.

Well, I had no idea where Jewell's story telling would take me this time. There are so many directions the past could take. But, the house is at the core of the story. Just Henry and his parents lived in the home - until his mother invited two other families to live with them. And one of those 'others' slowly takes control of the house - and the lives of the rest of the inhabitants. Cult-like you could say.

Jewell employs a past and present narrative in The Family Upstairs. We start with Libby's discovery - that twenty five years ago, she was the baby found alive, with three dead bodies in the house and two others missing. We're along as she tries to find answers with a journalist friend. But, the reader is privy to two narratives from the missing. From them the reader learns what life was like inside the house and what lead to those bodies. And what they might want from Libby today.

And that makes for some disturbing listening. I could feel the tension rise as I listened to each new entry in the tale. The Family Upstairs has a pretty dark undertone running through it - traumatized children being the main plot line. The now grown survivors have created new lives and in some cases, new names for themselves. I had to cement who was who in the beginning.

The present begins to make more sense as the listener learns more and more about the past. The final run to the last pages had me listening late into the night. And Jewell throws in a nice little twist in the end that gave me shivers...

I chose to listen to The Family Upstairs and was really happy that there was more than one reader. It became easy to know who was talking with three narrators - Tamaryn Payne, Bea Holland and Dominic Thorburn. All did a great job and I thought each voice suited the character they were portraying. Thorburn does the innocence and outrage of young Henry really well and adds a darker note as adult Henry. I'm not sure what reader did the two female roles, but they were excellent as well. Again, innocence and confusion for Libby. But the Lucy reader was the one I enjoyed the most. (She was also my favourite character) All were easy to understand, their diction was clear and the speaking speed was just right. I've said it before and I'll say it again - I become much more immersed in a book when I listen to it. See for yourself - here's an excerpt of The Family Upstairs.
Posted by Luanne at 7:00 AM

I love Jewell's work - it's nice to know this is good on audio.

Really good on audio - and a completely different story!