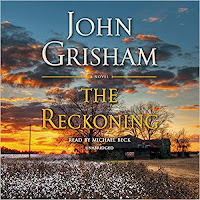 What? Well, time flies and sometimes I just seem to run out of it! So, Short and Sweet will be just that - some brief thoughts on books I've read or listened to. And when you see S and S, chances are I'm either busy, tired or on vacation!

The Reckoning by John Grisham was another back and forth to work listen. Narrated by Michael Beck.

Pete Banning was Clanton, Mississippi’s favorite son—a decorated World War II hero, the patriarch of a prominent family, a farmer, father, neighbor, and a faithful member of the Methodist church. Then one cool October morning he rose early, drove into town, and committed a shocking crime. Pete’s only statement about it—to the sheriff, to his lawyers, to the judge, to the jury, and to his family—was: “I have nothing to say.” He was not afraid of death and was willing to take his motive to the grave.

In a major novel unlike anything he has written before, John Grisham takes us on an incredible journey, from the Jim Crow South to the jungles of the Philippines during World War II; from an insane asylum filled with secrets to the Clanton courtroom where Pete’s defense attorney tries desperately to save him.

Reminiscent of the finest tradition of Southern Gothic storytelling, The Reckoning would not be complete without Grisham’s signature layers of legal suspense, and he delivers on every page."

I hadn't read or listened to a Grisham book in awhile and thought I would give this one a go. I hadn't read the premise before slipping in the first disc. I liked that it was a period piece, set in the years just after the war. The setting was the South, a place Grisham uses often and does well. And The Reckoning was no exception.

The shooting takes place in the first few chapters. The reason for that shooting is the mystery. And that's what kept me listening. As the book progressed, I had a pretty good idea of the why. But the ensuing trial and verdict takes place long before the end of the book - without revealing the why. The timeline switches back to before the shooting, when Pete was in a Japanese prisoner of war camp. I listened to a bit of this, but admit to fast forwarding - I just didn't want to listen to war atrocities. And then we bump back to the present where Pete's family is still trying to find that why. I found the timeline jumping jarring. And when I got to the final why, I was disappointed - in Pete and Grisham.

This was just an okay listen for me. Perhaps I went in expecting another type of read. The book is very well written - it's just not one I loved. But, I do have a hold on his forthcoming book, The Guardians.

Beck did a good job of capturing the character of Pete with his low tone and slower pace of speaking. His interpretation matched the mental image I had created for the lead character. His voice is clear, easy to understand and pleasant to listen to. Hear for yourself - here's an excerpt of The Reckoning.
Posted by Luanne at 7:00 AM

I haven't read a Grisham too for simply ages. I enjoyed your review.

I haven't read a John Grisham book in years, so I ended up getting this book after hearing some good things about it. Haven't read it though!

Mystica and Dianna - I've just started his new one - The Guardians - and it's really good.