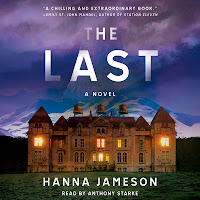 A secluded old mansion under an ominous sky? Yup, guaranteed to catch my interest. And then I listened to the first chapter and was absolutely hooked on Hanna Jameson's new novel The Last.

It's finally happened - nuclear war on a world wide scale. Jon was at a remote Swiss hotel attending a conference when it happened. Now he and twenty others are holed up in the hotel, waiting. For what they're not sure - rescue? Or just survival? Stay or go farther afield? And then the body of a young girl is found in one of the hotel's water tanks. Is there a murderer amongst them? The hotel also has a checkered past - suicides and ghosts are part of it's lore.

The setting is absolutely perfect for a 'locked room' mystery. And the cast of twenty strangers guarantees a wealth of conflict and suspects. Jon has no idea if his own family is alive and becomes focused on finding who killed the girl.

The dynamics of these survivors is fascinating. What will each do to survive? What alliances are forged? What secrets are being kept? And there's no way to predict what's going to happen - which I really like. I want to be surprised. And I was - the ending was unexpected. (Not sure if I loved it. But I loved the book.)

Jon decides to keep a 'history' of the 'after' and The Last is told through his documentation. "History is only the sum of its people and, as far as I know, we could be the last ones."

As I mentioned, I decided to listen to The Last. The reader was Anthony Starke - a new to me narrator. And now one I hope I hear more of. His voice is so expressive and easily captures the emotions, nuances and tone of the book. He's a clear speaker and is easy to understand. There are many nationalities, ages and genders amongst the survivors and Starke has a voice for each of them. He uses different (and believable) accents for each and adjusts the tone and timbre convincing the listener that there are indeed a group of people in the hotel. And as I've said before, I find listening immerses me in a story. And I was completely caught up in this one! An excellent audio book! Listen to an excerpt of The Last.
Posted by Luanne at 7:00 AM

I've been watching this one and thinking I might like it. Good to know what you thought about the audio. Think that's the way I will go with it. Hope my library gets it - soon-ish!!

Kay, I know I enjoyed it more by listening.

This sounds good. Thanks for the review.