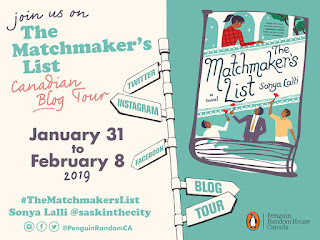 Two years ago, Raina Anand made her Nani (grandmother) a promise - "...if I wasn't married at thirty, I'd let her make the arrangements for me." Well, that 30th birthday is creeping up....

Nani makes a list of possibilities - 'nice Indian boys for my Raina'. And so Raina begins a series of (quite funny) first dates. Most of them end up being first and last dates. You see, Raina is still in love with Dev, despite it being two years since they broke up.

Nani was my favourite character - her love for the granddaughter she has raised is all encompassing and absolute, no matter what. Some 'what' does happen in Lalli's plotting. I must admit to feeling more than a bit uncomfortable with one significant plot device. (I'm being deliberately obtuse as I don't want to give anything away.) I found it insensitive and not what I would have expected in this day and age. While Raina is almost thirty, she has a lot of growing up to do.

Shay is the best friend and she was wonderfully drawn - exactly the kind of person you would want as a best friend. I enjoyed the other supporting players as well. Now, this is billed as a rom-com, so you know there's going to be that yes/no/maybe so love interest - from both past and present. The reader will have no problem picking the right one for Raina, but will she be able to see for herself?

I enjoyed the exploration of Indian culture and the study of traditional expectations vs. younger generations. Lalli also explores familial relationships within the Anand family - there's some heavier stuff there. The Matchmaker's List is set in Toronto. Many of the neighbourhoods and settings were places I've visited and was able to easily envision.

Read an excerpt of The Matchmaker's List. Here are some other reviews and opinions from Goodreads.

"Sonya Lalli is a Canadian writer of Indian heritage. She studied law in her hometown of Saskatoon and at Columbia University in New York, and later completed an MA in Creative Writing and Publishing at City, University of London. Sonya has a black belt in Tae Kwon Do and loves travel, yoga and cocktail bartending. She lives in Toronto with her husband." You can connect with Sonya on her website and follow her on Twitter.
Posted by Luanne at 7:00 AM