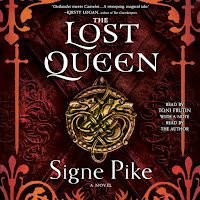 Okay, I'm going to lead off with this blurb from Simon and Schuster about Signe Pike's new novel, The Lost Queen.....

"Compared to Outlander and The Mists of Avalon, this thrilling first novel of a debut trilogy reveals the untold story of Languoreth—a forgotten queen of sixth-century Scotland—twin sister of the man who inspired the legend of Merlin." Hmm, okay - definitely caught my interest. After listening to the first few chapters? Hooked!

Pike's research is so rich with detail. The settings sprang to life - the castles, the forest, the details of everyday life, clothing, food, family and more. The time period encompasses the clash between the Old Ways and burgeoning Christianity and the wars between kingdoms. Again, well detailed and presented.

The characters will draw you in and transport you back to the sixth century. Languoreth is so well drawn - strong and fierce. Her family and friends are just as well drawn. The 'bad guys'? You'll have no trouble identifying them. The romance angle offers up two very different men in Languoreth's life. This part of the plot is not overwhelming to the main story or overdone, instead it's just right.

I love Arthurian legends and it was this part of the book that captured me - the legends, the portents, the signs and the magic.

I chose to listen to The Lost Queen - the reader was Toni Frutin - and she was amazing. She has a wonderful Scottish accent that is so easy to understand and pleasant to listen to. It immediately embodied the mental image I had created for Languoreth. It's rich and full and her narration is so very, very expressive, capturing all the nuances of Signe's book. Listen to an except of The Lost Queen.

Pike's writing is so very good. This first volume of a planned trilogy is satisfying on it's own. But the last few chapters gives us a hint of what will come next for Languorethe's next challenge. I can't wait for the second book and more of The Lost Queen.
Posted by Luanne at 7:00 AM