Josh and Hazel's Guide to Not Dating - Christina Lauren 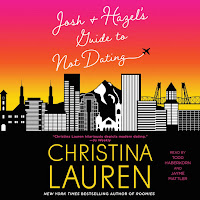 Every so often, I need to step away from the murder and mayhem that populates most of my reading. I found my latest light, fun escapist listen in Josh and Hazel's Guide to Not Dating by Christina Lauren.

Hazel. Well, Hazel could be easily (and accurately) described as 'over the top'. She says what she thinks, does what she wants - most often without a filter. Josh. Calm, thoughtful and the complete opposite of Hazel. The two meet at college and surprisingly become friends. And life moves on. Could their relationship move to a different level as well?

The yes, no, maybe so of this possible relationship is filled with quirky situations, humorous moments, fun dialogue - and yes, romance. Do opposites really attract?

Josh and Hazel's Guide to Not Dating is told through both Josh and Hazel's viewpoint. It was fun to be a fly on the wall, privy to what both were thinking, often about the same situation. Now, here's the thing - as much fun as Hazel is, I did find her a bit overwhelming as the book progressed. I was more enamoured (okay reader crush) of Josh. Yup, he's everything you would want in a boyfriend. We also get to know the families of Josh and Hazel. I found these relationships and characters charming and heartwarming.

Josh and Hazel's Guide to Not Dating is narrated by two readers -  Todd Haberkorn and Jayme Mattler. Both readers were excellent. Mattler's voice has a young, fresh tone with a nice little gravelly undertone. She's very expressive, interpreting the character perfectly and creating a vivid mental image of Hazel for me. Haberkorn's voice also has a tone that suits the character. It's easy to listen to and again painted a vivid mental picture of Josh. His voice has a lot of movement and brings the story to life. It has a soft, mellow tone that suits Josh's pace. Listen to an excerpt of Josh and Hazel's Guide to Not Dating.

I can absolutely see this one as a rom com movie. This was a first read/listen of Christina Lauren for me, but it certainly won't be the last.
Posted by Luanne at 7:00 AM