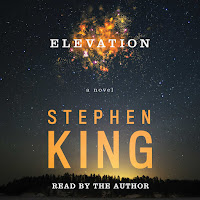 I've read everything Stephen King has written and was excited to hear he had a new book coming out. Elevation is newly released.

Fans will recognize the setting immediately. Castle Rock, Maine. Scott Carey has been losing weight. He can see it on the scale. Oddly enough, the number stays the same even if he's wearing clothes. And his body doesn't look any different. But he's definitely lighter....

Even as Scott's weight decreases, a small fracas with his neighbours increases. But it's not just Scott, it's most of the town against this couple. Scott decides to try and turn things around.

Elevation is the perfect listen for this time of the year. It's timely in so many ways. Uplifting I would say. ;0) Elevation tackles intolerance, doing the right thing and simple kindness and decency with a classic King supernatural twist.

I was thrilled to see that King himself was the narrator. There's nothing like having an author read his own work. The emphasis, the interpretation, the emotion, the quirks and so much more are presented exactly as he intended them to be. Listen to an audio excerpt of Elevation.

A bonus short story, Laurie, is included. And will give regular readers a nice little jolt of King horror....watch out for the 'gators.

This listener really enjoyed Elevation. The ending was difficult - sad, but absolutely fitting. A great addition to my library.
Posted by Luanne at 7:00 AM

I'm picking this up from the library tomorrow.

Bermudaonion - I went in knowing nothing about the book, so it was a surprise - and yes, a winner.

Vicki - let me know what you think - you'll be able to read it in one sitting.