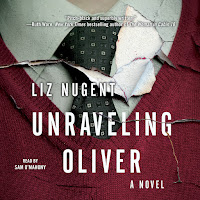 I had not heard of Liz Nugent's debut book, Unraveling Oliver, until I read about it in a publisher's newsletter. It was quickly added to my TBR list after I read the premise -  and the accolades. It was Ireland's Crime Novel of the Year in 2014. That cover image is absolutely perfect - cracks in a picture, peeling back of layers, what lies beneath that facade?

The first line of the book is killer...."I expected more of a reaction the first time I hit her."

Oliver Ryan is a successful children's book author and is happily married to his devoted wife Alice. So what would possess him to beat her into a coma? And that is the question at the heart of Unraveling Oliver. Who is Oliver really? What does the polished exterior he presents to the world hide?

Through Oliver's own ruminations and additional points of view from neighbours, friends and others from his life, we slowly see how and why he's come to be the way he is over fifty years. Each point of view was really well written. And can I say, I unexpectedly felt pity for him as I learned more and more. Nugent does a brilliant job of manipulating the reader's thoughts and emotions as the story progresses.

The publisher has promoted Unraveling Oliver promoted as a psychological suspense novel. I agree that it's an addicting, chilling exploration of a darkly drawn character. But, we know the end already and are working our way back to the beginning of the end. A clever, unique book, one I really, really enjoyed.

I chose to listen to Unraveling Oliver - and I found myself even more drawn into the story. Sam O'Mahony was the narrator. He has a lovely Irish accent that was easy to listen to and clearly understood. His understated interpretation of Oliver suited the character perfectly. His matter of fact tone is at odds with the horrible things Oliver does, but matches his mindset perfectly. He never raises his voice beyond a calm tone, which makes the revelations all the more chilling. Listen to an excerpt of Unraveling Oliver. Or if you prefer, read an excerpt.

I'm about halfway through this one and am enjoying it too.