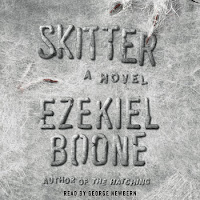 Skitter is the second book in Ezekiel Boon's 'Hatching' trilogy.

Skitter doesn't stray that far from the tone, premise and style of the first book, The Hatching. For most of us, spiders are creepy crawlers that we avoid. (at least I am) What about killer spiders? Yeah, even worse eh? So, that's at the heart of Boone's trilogy. Man eating spiders that are seemingly unstoppable.

Boone has written an ensemble cast to carry out his premise. I really enjoy ensemble books - the large casts and multiple points of view. He's done a great job of creating such a wide net of characters, richly described and varied. His imagining of a world under siege by spiders is imaginative. (and creepy crawly)

I chose to listen to Skitter. (even typing that word makes my skin crawl.) The reader was George Newbern, one of my favourites. He has a unique voice - clear, pleasant to listen to and easy to understand. He has a wry tone that matches the book and captures Boone's dark humour. His inflections rise and fall, giving the tale movement. Listen to an excerpt of Skitter. Or if you prefer, read an excerpt. And yes, you really should listen or read the first book before jumping into Skitter.

I remember finishing the first book, The Hatching, and feeling somewhat disappointed that there were no final answers and I would have to wait 'til the next book came. (I hadn't realized that this was only book one until the very end.) There are further developments in the fight against the spiders in Skitter, but some of it seemed to be somewhat repetitive. I found a lot of Skitter was much detailing and describing of the multiple players' thoughts, lives and actions. But, I still found it to be a fun, entertaining read. The third book releases in February of 2018 and is titled Zero Day. Will I pick it up? Yeah, I will, but I think I'll listen to it as well. I can see this trilogy on the screen - it absolutely reads like a movie.