There's a Monster in Your Book - Tom Fletcher 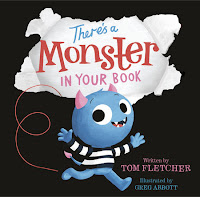 There's a Monster in Your Book is newly released from Tom Fletcher.

Now, with Little Guy, it's important that any 'monsters' have 'nice' faces and be 'not scary'. Greg Abbot's illustration of Tom's monster was approved by Little Guy, so Gramma started to read....

Well, Gramma can read the words, but There's a Monster in Your Book is an interactive experience. Young readers and listeners are encouraged to help shake, shout, spin, tickle, tilt and blow to get the monster out of the book. There was lots of silliness as we both participated in the actions needed

When the monster does get out of the book, he lands in the child's bedroom. Mom said she would have preferred the monster to land in any other room besides the bedroom. This opened up a good discussion - and of course the book reinforced that everything was okay. (There is a way to put the monster back in the book)

I think we read it together about three or four times and then Little Guy decided to read it to Gramma. The illustrations of each action are colorful, perfectly suited and allowed him to easily tell the story as well.

There's a Monster in Your Book was a fun, engaging read. Thumbs up from Little Guy and Gramma. See for yourself - here's an excerpt. While recommended for ages 3-7, I think the younger crowd would appreciate this book more than school aged.

Tom Fletcher is an award-winning songwriter, as well as a children’s author, YouTube star, daddy,

and McFly band member. He has 1+ million followers on Twitter and Instagram: @TomFletcher and on YouTube as tommcflytwitter. He has a huge social-media presence and his viral videos, including “Buzz and the Dandelions” and “My Wedding Speech,” have been featured on Good Morning America. He and his bandmate Dougie Poynter are the co-authors of the Dinosaur That Pooped picture books, which have sold over one million copies in England. Tom is married to the author Giovanna Fletcher, and they have two children.

Greg Abbott is an illustrator and graphic designer based in West Sussex, England. In addition to children’s books, he has created prints, apparel, toys, greeting cards, and other merchandise. Visit him on Tumblr or follow him on Twitter. 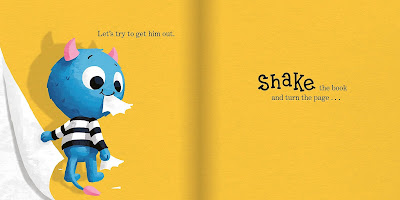 This looks and sounds adorable!