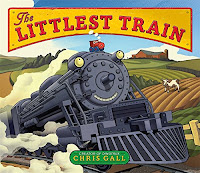 Ahh trains - Little Guy loves his trains. So Gramma thought that The Littlest Train by Chris Gall might appeal to him....and it did!

He first noticed the 'nice' face (no scary faces for Little Guy) on the larger train and then spied the little train riding atop. He was definitely interested, so we turned the cover and started to read.

The Littlest Train lives on a train table until he is knocked off one day. He then goes exploring and is helped along the way by other, bigger trains to find his way back home.

The illustrations are quite lovely, done in muted, soothing colours. The introduction of lines and cross hatching throughout each item give the illustrations depth and texture. Those friendly faces extend to all the toys, trains and characters that populate the story. The little boy who owns the train table is named Mr. Fingers. Which makes sense from the train's point of view I suppose. But perhaps a name like Bobby would have been easier for a little one, with no explanation needed as to why he was called Mr. Fingers. We enjoyed looking at the pictures and places that the Littlest Train got to visit outside of his train table home. This did spark Little Guy to show his trains some new places in his home. Gramma quite liked the mouse's home. (The Borrowers came to mind!) The trains that help him find his way back are all different. (A description of each is included on the last page.) They have names that match their build - Farley Freighter, Sara Speedster etc.

I did like that some pages did not have dialogue. Instead, Little Guy was able to tell that part of the story himself by deducing what was happening from the illustrations. Discussions around exploring, helping and missing something or someone could be started from this story.

The setting, characters and plot will be somewhat familiar to those who have read or played with another well known train and his friends. And after closing the book, Gramma and Little Guy had to go play trains of course!

"Chris Gall is the award-winning author and illustrator of Dinotrux, a Publishers Weekly Best Children's Book which inspired a Netflix original TV series, and the other books in the series, including Dinotrux Dig the Beach and Revenge of the Dinotrux. His other picture books include Nanobots, Dog vs. Cat, Awesome Dawson, Substitute Creacher, and America the Beautiful, another Publisher's Weekly Best Children's Book. He lives in Tucson, Arizona."
Posted by Luanne at 7:00 AM

I think my son would have liked this when he was small too.