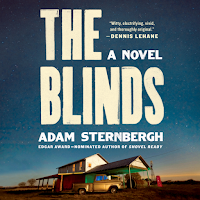 The premise of Adam Sternbergh's new novel The Blinds, intrigued me.....

An isolated small town in Texas, home to those who can't remember why they were sent there. In their past lives, they were either criminals or witnesses. Now, their memories have been wiped out and they live in the town they refer to as The Blinds. They'll live and die there, as the agreement they made ensures they can't leave. But, after eight fairly peaceful years, Sheriff Cooper has trouble on his doorstep. A suicide, a murder and strangers arriving in town have upset the rhythm and routine of the town......

The Blinds has a distinctly unique plot driving the book forward. There was no way to even begin to predict where things might go. Carrying that plot forward are a fairly large number of residents. Those residents are only known by the names they chose when they arrived - a combination of a movie star and a President's name. (This alone fulfills the publisher's note that the book will appeal to Coen Brothers fans)  I wondered if anyone remembered their before - or was there anyone there who didn't have their memory wiped?  I found it was hard to really connect with the characters as they have no back story, no memories, no reasons - they are simply marking time until....? What are these government looking guys after? Their arrival did open up the possibility that we would learn more. And we definitely do - but truthfully I wasn't that invested by the time answers finally came. And maybe its because of my pragmatic nature, but I found the ending a bit hard to buy, as well as some of the later plot devices that led to the final resolutions. This was just an okay read for me, but I may be in the minority on this one - there are many who loved it.

I chose to listen to The Blinds. The reader was Stephen Mendel. He's a reader I've enjoyed before. His voice is clear, easy to understand and is expressive - rising and falling as he narrates. Mendel differentiates between characters with tone and tenor. His matter of fact tone suited the unusual plotting of The Blinds.

The Blinds defies being slotted into a genre. It's part mystery and thriller along with some sci-fi and Western overtones. See for yourself - Listen to an excerpt of The Blinds. Or if you prefer, read an excerpt.
Posted by Luanne at 7:00 AM

I'm reading this one right now and, so far, it's okay for me too.