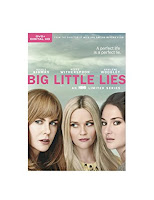 A work colleague kept telling me I needed to read Big Little Lies by Liane Moriarty. I never got around to it - until now. She also raved about the newly released HBO mini series of Big Little Lies. (available on DVD and Bluray) So I thought I would read the book first - and she was right - it was addicting and so very good! After the last page, I couldn't wait to see what HBO had done with this tale.

Well, I have to say, they did very, very good things. I ended up binge watching over two days - and being exhausted was so very worth it! Now, in case you have no idea what it's about......

"Big Little Lies is based in the tranquil seaside town of Monterey, California, where nothing is quite as it seems. Doting moms, successful husbands, adorable children, beautiful homes: What lies will be told to keep their perfect worlds from unraveling? Told through the eyes of three mothers – Madeline (Reese Witherspoon), Celeste (Nicole Kidman) and Jane (Shailene Woodley) – Big Little Lies paints a picture of a town fueled by rumors and divided into the haves and have-nots, exposing the conflicts, secrets and betrayals that compromise relationships between husbands and wives, parents and children, and friends and neighbors."

Wow! The casting could not have been better. These three stars perfectly suited each role. Witherspoon's manic portrayal of Madeline seemed effortless. Kidman's embodiment of Celeste completely captured this private character. Woodley was a great choice for the younger Jane. Fantastic acting. The male supporting cast isn't mentioned, but I have to say they were just as good. Particularly Alexander Skarsgard - he was downright chilling.

The show unfolds in past and present scenes. We know from the first episode that something happens at the school talent show amongst the adults....but what? Police interviews, flashback scenes and memories start to fill in what we don't know - even as the present hurtles towards an inevitable conclusion. Twists, turns, secrets and reveals. Having read the book, I knew that there were darker turns along the way. I thought the way the mini series revealed things was really well paced and so suspensful. The music selections were great, the scenery breath taking, the cinematography was so effective and so much more.

Now, there are always changes when a book is adapted for the screen. The locale has changed from Australia to California. I have to say, I think it was very effective. The lives of the rich and privileged played out better in the US for this viewer. And of course there are affairs - who changes from book to movie. A few characters are missing or their roles reduced. The whodunit for the death on Trivia Night stays the same, but the reasons are not as defined. And things are of course more tided up in the final pages of the book.


I have to say that even though the book was good, the mini series was even better for me.  A definite five stars. Check out the trailer below.  "Big Little Lies garnered 16 Emmy nominations including best limited series, Witherspoon and Kidman as lead limited series actress, Laura Dern and Shailene Woodley as best supporting actress limited series and Alexander Skarsgard as best supporting actor in the category." Uh huh, that good. Talks are happening with Lianne Moriarty about writing a second season for HBO. Fingers crossed!

I listened to the book and didn't love it (maybe because of the narrator's accent) so I skipped the series. Maybe I should give it a go.

Hi, I'm Patrick form Tester-Club.
We have about 20.000 members. Through us, you will receive highly discounted products on Amazon.
- Registration in Tester-Club is free
-Our product categories are: electronics, sports & outdoor, home & kitchen, health & personal care, baby, beauty, tools and many more
The only catch: After receiving the products, you need to review it honestly in your Tester-Club Account.
If you want to register, please click here: https://www.tester-club.com/?lang=en