The Secrets She Keeps - Michael Robotham 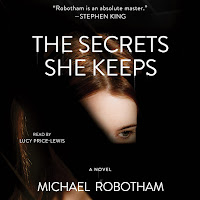 Michael Robotham is hands down one of my favourite authors. His latest is a stand alone called The Secrets She Keeps. And oh, it is so very good!

Agatha works in a grocery store part time. She's joyfully awaiting the arrival of her baby. And she's hoping to hear from the father of the baby who is out at sea. Meghan shops at Agatha's store and is also expecting a baby - her third. Meghan has all the advantages that Agatha doesn't - money, a large home, two other children, a successful enterprise and a husband. Agatha discovers that they are both due in the same month and and initiates a conversation. This contact looms larger in Agatha's mind, but both women are harbouring secrets....

The secrets are slowly revealed and one of the women has a secret agenda. Robotham's slow revealing of each woman's secrets and true nature makes for an absolutely addicting read/listen. And even though one of the women's actions are appalling, I found myself feeling sorry for her and hoping that maybe things would go her way. I am being deliberately obtuse as I don't want to spoil things for you. But what I can say is that this is one of my top reads for 2017. Loved it! And if you like psychological suspense this one's for you.

I chose to listen to The Secrets She Keeps in audio format. I find that some stories are even better when given a 'voice.' That was most definitely the case this time. The reader was Lucy Price-Lewis. She was wonderful. She had two very different voices for each character, making it easy to differentiate who is speaking. Her accents for each provided a vivid mental images. Her voice is easy to understand, pleasant to listen to and very expressive. She captured the tone of  Robotham's plot and characters. I felt immersed in the story.  Listen to an excerpt of The Secrets She Keeps. (scroll to the bottom)

I've never read Robotham but now I want to. I'm wondering about these women's secrets.

New author for me as well.