The Revenant on Blu-ray and Digital HD 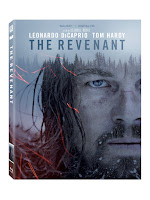 It seems to me lately that the best movies I've watched have been based on really great books. Such is the case with Director Alejandro G. Iñárritu's award winning film The Revenant. (Based on Michael Punke's book) I always try to read the book first and then watch the movie. The book was fantastic and I hoped the movie would be as well.

The Revenant on Blu-ray and Digital HD is newly released from Twentieth Century Fox Home Entertainment.

And my hopes that the movie would be good were met and far exceeded. Leonardo DiCaprio won an Academy and Oscar Award for Best Actor. The film won numerous other prizes.

DiCaprio portrays Hugh Glass, a frontiersman/tracker in 1823 America with a fur company, who is severely mauled by a bear. With both winter and hostile natives on their heels, the company commander assigns two men, Fitzpatrick and Bridger to stay with Glass until he dies, bury him and then catch up with the rest of the company. Also with Glass is his son Hawk, who is sure his father can survive. Seemingly close to death, everyone figures it won't be long 'til the end.

Fitzpatrick, played by Tom Hardy, decides that he doesn't want to wait around for Glass to die and instead chooses to leave him on his own. Hardy brilliantly interprets the despicable character of Fitzpatrick. I don't know how many times I yelled at the screen.

But it is Leo who steals the show. He has very little dialogue, but his physical acting and his facial expressions (especially his eyes) transmit so much more than words could have. His courage, grit, perseverance and determination to hunt down Fitzpatrick becomes the viewer's goal as well.

Not far behind Leo is the cinematography - the backdrops are simply spectacular - the choice of actual settings instead of green screens brings the wildness and wilderness of the time and place to life. Costuming and physical props are just as believable. The bear attack is also really believable. (and a bit hard to watch)

Iñárritu has changed some of the events from the book - most notably, Glass's reason for revenge. But it works. This reason is more personal and will have the audience even more invested in Glass's drive for revenge. With every tortured step and obstacle thrown in his way, I was urging him forward, just as determined that he have his retribution. Iñárritu has also changed the ending from the book. It wasn't what I expected and I watched it two or three times. In the end, it seemed right and fit with the 'extra' character(s) that he had brought to his version of the story.

Brutal and brilliant, The Revenant is a welcome addition to my film library. Check out the trailer below. Gentle readers/watchers please be warned there are some graphic scenes. @RevenantMovie

A couple friends have already told me they think this one's too graphic for me.