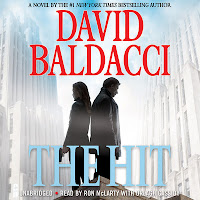 David Baldacci is a master in the genre he's chosen -action packed adventure with a healthy side of flag waving.

His latest - The Hit - is the second in the Will Robie series. Will is an assassin for the US government....

"A highly skilled assassin, Robie is the man the U.S. government calls on to eliminate the worst of the worst-enemies of the state, monsters committed to harming untold numbers of innocent victims."

This time, Robie's next target is closer to home. He's been tasked with finding and killing Jessica Reel. Reel is an assassin like Robie - and just as good. But it looks like she's gone rogue - she's killed two high ranking military officers. Or has she? As Robie and Reel play cat and mouse, new facts emerge, leading Robie to question his orders - and his superiors.

I don't think I've read a Baldacci book in a long time. Instead I choose to listen to them, as Hachette Audio has put together a fantastic team that has narrated most of his books. Ron McLarty has one of the best voices I've ever listened to. It's deep, gravelly, expressive and oh so resonant. He absolutely captures the tone and characters of Baldacci's work. Orlagh Cassidy plays the female characters in the audio versions of Baldacci's novels. She's the perfect companion for McLarty, with just as expressive a voice. Together they provide a rich listening experience. Hachette Audio has enhanced this by adding sound effects and music to this production.

As I said, Baldacci has found a formula that works for him and he's good at it. So, the tone is similar to past novels, but I've found them to be entertaining listens for the drive back and forth to work.

Those who enjoy espionage thrillers would enjoy any of Baldacci's titles. You can find David Baldacci on Facebook and on Twitter.

I haven't read Baldacci in a while either but always enjoy his books.

The Start was certainly a surprise. For a novice to Baldacci's fiction, it could be exhilarating.
However,since I have read almost all books written by David Baldacci, after about 100 pages into the book, The Hit, I felt a kind of dejavu pf John Carr.
In comparision to Camel Club, this would fall short of expectations.