Ruby Rousseau left Tarble College one credit short of her degree. A failed affair with one of her professors led to a suicide attempt and her decision to not return.

But when a suitcase she had borrowed from Beth, one of the women on her dorm floor, is mistakenly returned to her at her mother's home, the past won't stay buried. For Beth is missing and notes scribbled in the margins of a book found in the suitcase lead Ruby to believe that Beth was also having an affair with the same professor.

Ruby makes the decision to return to Tarble - to help look for her friend, to confront the past and reclaim her life. I was intrigued by Hansen's premise.

The Butterfly Sister is written from a Ruby's point of view - both past and present and the narrative is switched between the two time periods. We are witness to the beginning and end of the affair as the search continues in the present for Beth.  Such affairs are nothing new, but I had a hard time buying how much in love Ruby was with the professor Mark. He just came off as unctuous to me, not really a romantic catch. But this old, jaded reader can see how a young woman might be swayed.

Hansen does an excellent job weaving together and exploring Ruby's literary studies and her fascination with works by authors who struggled with mental illness, such as Plath and Woolf, who ultimately committed suicide. I thought her thesis topic was especially interesting and really had me thinking. Hansen also did a great job  handling the subject of depression, Ruby's emotions and feelings. The first half of the book is introspective with a somewhat Gothic feel.

But, the second half of the book caught me unawares - I almost felt like I was reading another author's writing. From an intelligent, literary feel we are plunged into a watered down mystery full of convoluted solutions that I just had a hard time buying. One or two of them maybe, but Hansen just kept adding another and another. The ending was contrived and the epilogue unnecessarily  'they lived happy ever after'.  This was a disappointment to me after such a promising first half. Ultimately this bumped the book down to a 3/5 for me.  Read an excerpt of The Butterfly Sister. 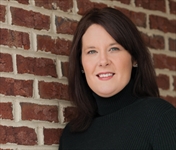 I may be in  the minority on this one - it's an Indie pick for August 2013. See what other bloggers on the TLC book tour thought. Full schedule can be found here.

A former English teacher, Amy Gail Hansen is a freelance writer and journalist living in suburban Chicago. This is her first novel. You can find Amy Gail Hansen on Facebook.
Posted by Luanne at 6:30 AM

I really enjoy when novels explore other literary works in the story. Thanks for being on the tour!

I'm torn by this one - it sounds very interesting, but I hate it when the quality changes for the worse ...

It sounds very interesting despite the ending.

THANKS for sharing. Nice blog.

THANKS for stopping by my blog. Nice to see your comment.