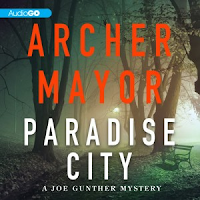 Archer Mayor has long been a favourite of this reader.

Paradise City is the twenty third entry in Mayor's Joe Gunther series. Joe is a Lieutenant with the Vermont Bureau of Investigation.

Paradise City's opening scene lands us smack dab in the middle of a a robbery. A set of thieves who have targeted a wealthy older woman's home in Boston. But when the woman, Billie, confronts them, she is beaten and left for dead.  And the only thing the thieves take is her antique jewellery.

Meanwhile, in Vermont, the State Police are happy to pass on the investigation of an unusual robbery and arson case to Joe and his team.

When Boston and Vermont compare notes, it looks like they might be after the same criminals. Word on the street is the goods are headed to the same fence. Billie's niece Mina is not satisfied with the way the inquiry is progressing and starts her own investigation. We are also privy to the viewpoint of someone inside the operation.

As always the crime is inventive, believable, the plotting tight, the dialogue rings true and the investigation is detailed.  Archer Mayor himself is a death investigator for Vermont’s Office of the Chief Medical Examiner, a detective for the Windham County Sheriff’s Office, and also has 25 years experience as a volunteer firefighter/EMT. His books reflect that insider knowledge.

But what I enjoy most about this series are the recurring characters and their personal lives. Joe's life has had its up and downs lately, but he takes a backseat this time to Agent Willy Kunkle. Willy is a difficult man at the best of times, but he is finding things increasingly difficult. He's partnered up with Agent Samantha Martens both professionally and personally. The recent addition of a baby daughter to their lives has Willie more reckless and surly than normal. I've enjoyed following the personal lives of Gunther's characters over the years. When I open the latest book, it's like old familiar friends are waiting to tell me the latest news.

Now, this is the first time I've chosen to listen to one of Mayor's books. After having firmly established a mental image for the characters over time, I wondered how the narrator would interpret Mayor's work. William Dufris was the reader - and I needn't have worried. The voice for Joe is low pitched, even -paced, kind of gravelly with an almost folksy tone to it.  He just sounds wise, and ready to handle whatever is thrown at him. But not all even paced - the angry Joe voice was quite impressive! Dufris provided believable voices for the female characters as well. His narration is expressive and captures the tone of the scenes and action. Not surprising though - Dufris is a multi award winning reader. When looking at an audio book, I will sometimes choose a book solely based on the reader. I'll be adding William Dufris to my list of preferred narrators. Listen to an excerpt of Paradise City below.

This sounds a good one.

I like it when the crimes and characters are believable so this sounds good to me.