She Loves Me Not - Wendy Corsi Staub 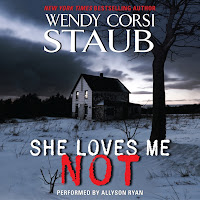 Wendy Corsi Staub is a new to me author, but definitely not a new author - she has close to eighty books to her credit!

She Loves Me Not has been recently released as an audio book.

Rose Larrabee is a widowed mother of two. She's working hard to keep things together, both financially, physically and emotionally. When someone leaves a heart shaped box of candy on her car seat, she figures she has a secret admirer. But when someone repeatedly calls in the middle of the night, she starts to get worried. And when the 'attention' escalates, she gets downright terrified.

I chose to listen to this book. The reader was Allyson Ryan. Her portrayal of Rose was good, capturing the innocent, bewildered woman in peril tone of the character very well. Rose has two small children and I thought she did a great job of coming up with a believable and distinct child's voice. (Although I must admit, I tired of hearing Leo after awhile) Accents for various characters were authentic and easily distinguished who was speaking. I did find the voice for the female neighbour we're not quite sure of, to be quite annoying though - it was whiny and somewhat petulant. But in all fairness, it suited the character.

I always find listening to a book much different than reading - I think I take away different experiences from the two formats. In She Loves Me Not, we are privy to much of the various player's inner thoughts - maybe a few too many.  Staub does mix in action in the last half of the book and populates her plot with plenty of suspects - enough to keep the reader guessing. Although, I have to admit to feeling cheated over the final whodunit.

Staub seems to have perfected the woman in peril with a touch of romance, mystery and suspense for good measure formula. And I would say she excels at it. Although this isn't my favourite type of read, it was an entertaining listen for the ride back and forth to work. This author would definitely appeal to fans of Mary Higgins Clark. Listen to an excerpt of She Loves Me Not.

Hm, I'll have to think about this one.

Thanks for adding the link so we could hear the narrator. I think she does a great job.

Kathy - it was okay, not great for me. I like my mysteries a little grittier.

Vicki - you're welcome. I'm glad to know that readers are using the excerpt links!