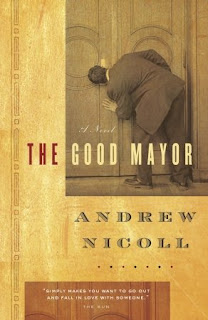 The Good Mayor is Scottish author Andrew Nicoll's debut novel and is newly released from Random House Canada. Nicoll is a former lumberjack turned newspaper journalist who wrote The Good Mayor on his commute back and forth to work.

This tale is narrated by St. Walpurnia, a bearded nun, who has watched over the small town of Dot, in a forgotten corner of the Baltic, for many, many years. Tibo Krovic is the mayor of Dot. He is known as Good Mayor Krovic as he always says and does the right thing. The good mayor has harboured a secret for many years. He is in love with his lonely, married secretary - Mrs. Agathe Stopak. But he worships from afar, or at least peeking under the crack in his office door, afraid to let her know of his feelings. One day fate, or St. Walpurnia, steps in and it seems like the good mayor and Mrs. Stopak may have a chance at true love. But the path of love is almost always crooked....

Now it sounds like a mushy love story but it's anything but. We have Strega Mamma Cesare (an Italian witch) who sees and knows much more about Dot and its' inhabitants than anyone realizes.

" Small and brown, Mamma Cesare waddled in front of them like a magic toadstool leading two lost children through a fairy story."

And that is the feel of The Good Mayor - a fairy tale for adults. Anyone who loved the film The Princess Bride will be enchanted by this story.

There is a circus troupe that only some can hear and see, but they seem to appear at the most opportune moments. And an enigmatic, very overweight lawyer who seems to also know a bit more than he should.

"...nothing in Dot is ever just quite what it seems. Nothing."

The story itself is charming but it is Nicoll's language and telling of the story that make it so wonderful. The thoughts, the feelings, the descriptions -all of it captured and held me until I reluctantly turned the last page.

As St. Walpurnia says "Anyway, this story is much more about the telling than the things that happen in it..."

Tender, funny, charming and beguiling - this one will stay with you and make you wish for a little bit of magic in your life...

Read an excerpt of The Good Mayor.

This looks really good. Doesn't look like it's available yet in the US. I'll be watching for this one!

Wow, what a great review, Luanne. You had me at quirky magical love story! Glad you enjoyed it so much.
Have a wonderful week.

This book sounds delightful. I want to read it after your review. I love the cover, too.

This sounds really good. Great review - I think I might have to add it as a suggestions for my book club next year. Thanks so much!

I'm going to come back to your review Luanne. I was just checking out the end for your final thoughts. I'm really enjoying this one as well.

This book sounds really good to me. I'm always attracted to a book when its description includes a line like 'nothing is ever quite what it seems'. I love that cover too. Great review!

Wonderful review! I am so looking forward to this book.

Sounds wonderful. I'll have to keep an eye out.

This is definitely not something I'd normally pick up, but your review is so good I am writing this one down. I also liked the sounds of the one a few entries earlier, about the doctor who helps end his wife's life. (Kind of gave me chills to read that part, though.) I am currently really enjoying "The Scarecrow," by Michael Connolly. (I will confess, though, that I'm getting bogged down toward the end! How weird is that?) And I have passed on to my husband, after I finished, an action adventure book (with romance, too), His Edge: Three Women, THree Mentors, One Plane." It's about a test pilot in the earlier days of flying (after WWII). I liked the characters and the romance and the story development, while my husband is loving the stuff about flying and the post-WWII era.

Hey Liz - It was something I normally wouldn't read either, but the more I blog, the more my reading tastes expand. Funnily enough I just finished listening to The Scarecrow. Connelly is one of my faves and it was different to listen to his book.

this one sounds good.

It sounds charming! At first I was a bit put off- mainly by the cover- but it does sound like something I would enjoy!

Wow, another great review for this book. I can't wait to see this book in the U.S.!