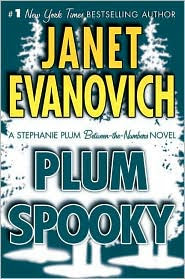 Stephanie Plum is back in this 'Between the Numbers' novel.

For those who haven't heard of this series, Stephanie is a bail bond recovery agent in New Jersey. Her adventures include the outrageous antics of her sidekick Lula, her off the wall Grandma and other residents of the 'Burg. She has two men in her life - cop Joe Morelli and the mysterious Ranger.

Plum Spooky is a bit longer than previous between the number offerings. Diesel, the rather otherworldy character from Plum Lucky and Plum Lovin' returns. Diesel has 'abilities' - he doesn't seem to need keys to open and start things among others. He is after his cousin Wulf who has teamed up with of Stephanie's 'failure to show' bonds. Wulf and his sidekick are out to dominate the world by controlling the weather.

Far-fetched? For sure. But that is the appeal of the Plum novels. Not to be taken seriously, just enjoyed for some fun, fluffy reading. As Stephanie says when Morelli asks her how her day was...

" It's average. Stole a truck. Blew up a house. Brought seven monkeys home with me. And now I have a naked man in my shower."

Actually Carl the monkey is pretty funny in this one. Grandma Mazur, who is my favourite, isn't featured too much. Evanovich does go a bit overboard with some of the characters in the Barrens - the fire farter was a bit too much for me.

If you're looking for a fun series that won't tax your brain, then you'll enjoy Evanovich's books.
Posted by Luanne at 7:02 AM

Email ThisBlogThis!Share to TwitterShare to FacebookShare to Pinterest
Labels: review

I've heard this is the best "between the numbers" book. Glad you enjoyed it.

Thanks! I'm glad to know that this is better than some of the others that come between the numbers; I was getting to where I didn't even pick them up at the library anymore.

LOL-I love her average day. I'm waiting for this one from the library but it has a ton of holds on it. I can't wait for another Stephanie adventure and I love Diesel.

Thanks for the comments! I have been listening to the early JE romances on CD in the car. Really easy to listen to and just plan fun romance.

I haven't gotten to this one yet...we have listened to plum lucky, sugar plums, and now plum lovin. I can't wait to get this audiobook!

I could have sworn the last sentence was "...that won't wax your brain..."

The sad part is I feel like my brain has been waxed a few times...lol!

After at least a month, I am now #10 on the library waiting list for this lol.