Got You Back - Jane Fallon 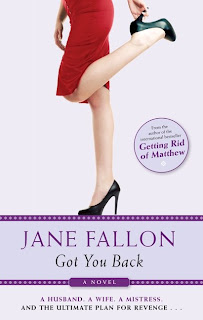 I first discovered Jane Fallon when I read her best selling debut novel Getting Rid of Matthew and was very happy to discover her second!

Stephanie and James are comfortably married with a seven year son, Finn. James is a vet and divides his time and week between two practices, one in the city and one in a country village. Although the marriage is a bit 'settled', Stephanie has no reason to think there's trouble until she inadvertently see a text on her husband's phone - "I'm really missing you. K xxx". She's not sure if it means what she thinks it does. He can't be having an affair can he? Ummm, yes he is. Instead of confronting James, she decides to track down the other woman - Katie. Katie is just as stunned as Stephanie - she thought he was divorced. They decide that James should not get off lightly and 'Operation Get Revenge on the Two Timing Shit' is hatched. But how far should you take revenge?

I hesitate to slap a chick lit label on this book. as it is much more than that. Fallon has written a smart, witty novel that draws you in (and won't let you put down - I devoured it in a day!). Her characters are realistic, likable and believable. They had depth and evolved. Katie is an innocent at first and the change in her character is convincing. It was satisfying to watch Stephanie's self confidence and search for personal happiness evolve after the bottom has fallen out. But I think Fallon particularly excelled with James, the husband. He is egotistical, pompous and firmly believes that he can have his cake and eat it too. The change in this character as the revenge scheme plays out is not what you would expect. I particularly enjoyed the ending.

You can read an excerpt of the book here!

Fallon is a British author and the partner of Ricky Gervais. Bet that's a fun household!

Shut up! She's the partner of Ricky Gervais!!!! Well no wonder I adored it!

The review pulled me in. Her being Ricky's partner is an added bonus! I'll definitely be picking up this one (=

That sounds good. I like chick lit with a little depth to it.

I've been hearing interesting things about this one. I think I may have read something similar before but I'd probably like this one (chick-lit needs depth).

You've succeeded in making me curious about the end and the husband's character evolution. I'll have to check this one out at some point.

Great review. This sounds good. Another for the wishlist. Glad you liked it.