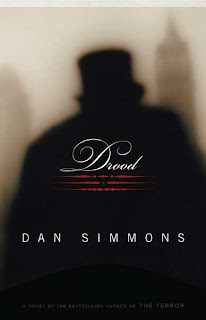 Ohh - doesn't the cover just grab you? The script of the title, the foggy background, the mysterious figure in a top hat? I was so excited to read Drood as part of Hachette Book Group's Early Bird Tour.

It opens with Victorian thriller novelist Wilkie Collins as the narrator.

"This true story shall be about my friend (or at least about the man who was once my friend) Charles Dickens and about the Staplehurst accident that took away his peace of mind, his health, and, some might whisper, his sanity."

It is 1865 and Charles Dickens is riding a train that crashes, killing nearly all aboard. As Dickens tries to help survivors, he notices a tall, thin, pale man with a 'skull like visage', wearing a heavy black cape, also among the survivors. But those the caped man is attending to seem to die despite or as a result of his attentions. This mysterious figure, who introduces himself as Drood, comes to haunt Dickens. Dickens insists that Collins accompany him into the underbelly of London, into the sewers where it is rumoured that Drood may live. It is also rumoured that Drood is responsible for many murders. But Collins begins to believe that Drood does not exist, that Dickens may himself may be Drood.

Dan Simmons' research is detailed and extensive. He has recreated the friendship and rivalry between these two esteemed authors, whose works are known and loved over 150 years later. The social life, dialogue and historical details of Victorian London are impeccably described. I love this time period and Simmons has done an amazing job bringing it to life - opium dens, lime pits, crypts, mesmerism and the slums of London. I found myself taking side trips to the computer to follow up on many pieces of knowledge presented in the novel.

The introduction of a supernatural aspect to the plot line was a bit disappointing and unexpected to me, but shouldn't have been- Simmons has a background as a sci fi writer. I was caught up in the idea of a serial killer living in Undertown and personally would have preferred the story to proceed strictly in that direction. The ending is somewhat ambiguous and ended and left me thinking of several possiblities. But all in all, I really enjoyed it. If you're looking for a historical novel written in the style of the time, you would be hard pressed to find a better (and bigger! 800 pages!) one.

You can listen to some really great audio excerpts here, here, here and here! Or listen to Dan read from Drood himself here.

Or check out some of the other stops on the tour at:

Like what you've read or heard? You can enter my giveaway here to win a copy for yourself!
Posted by Luanne at 6:51 AM

This does sound like an interesting story! It's always intrigued me when an author puts another (sometimes more famous) author in their book :)

Oh my goodness, Luann! You GOT me! This sounds completely unnerving! Please enter me in the giveaway!

Kelly - the giveaway is at this link

Just stopping by! It was a great read! I think Simmons is a genius!

Great review Luanne. This was such a great book, I'm glad you enjoyed it too! Dan Simmons may just be a new favorite author. I'm going to have to check out the ones he did about Mark Twain and Hemingway. And I'm so glad I have The Terror already; I'm thinking it may go to the beach with me!

Simmons did a great job recreating the time he was writing about. I was impressed.

Luanne, great post! & thanks for stopping by. I need to finish my review & get it posted!

Don't enter me. I wanted to tell you that your review is excellent.

Good Morning! Great review! The book really blew me away!

Great review! I really want to read this book, although I must admit I was intimidated by its length!

Great review Luanne! Just stopping by on the tour. I was hard pressed to condense this one down into a coherent review...

Dan Simmons has novels about Mark Twain and Hemingway? Ooh, must go find those!

Great review! I really had no plans of reading this book, mostly because I'm not a huge Dickens fan (forced reading in high school LOL). But you're got me curious. And I do like the cover!

I really enjoyed your comments, especially the way you opened your post. The cover does draw you in.

no need to enter me...but I am really enjoying this book!

I love your review! I loved the cover, also. I think it is a perfect representation of the story!

Lovely post! Just popping in! Have a great weekend.

I've seen Drood around *everywhere*. Thanks for the great review. I really want my husband to read it- I think it would be right up his alley.

An interesting book, but as a teacher who currently works in the school that occupies Gad's Hill (Dickens' home), I have to say that there are some careless factual errors. Gad's Hill isn't, for example, in Chatham. Tut, tut.