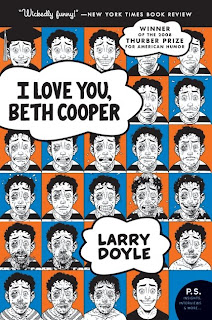 The premise of I Love You, Beth Cooper sounded fun and didn't disappoint.

Denis Cooverman decides as he is making his high school valedictorian speech, that it is now or never to declare his love for the very popular head cheerleader Beth Cooper. He has loved her from afar for five years. Well not too far, he has sat behind her in almost every class for five years. But as captain of the debate team, they don't run in the same circles. Or even walk.

I was laughing out loud in the first ten pages. Larry Doyle is very funny. (He has written for The Simpsons television show)

Beth decides to let Denis know that although she found his declaration embarrassing, it was kind of sweet. Beth's boyfriend, home on leave from the army, isn't too thrilled with Denis's announcement or Beth's talking to him. Denis and his best friend Rich, who can't stop spouting movie lines, host a grad party in the hopes Beth and her cool friends might come. Things don't go entirely as Denis had imagined. The real Beth isn't quite what Denis has fantasized for the last five years. The entire book takes place on graduation night. Think McLovin and friends from the movie Superbad. Or think of your own high school days and grad night.....

Doyle's debut novel kept me chuckling the entire way. This perennial edition from Harper Collins also includes some extras, including entries from the I Love You, Beth Cooper Agony/Ecstasy Contest.
Posted by Luanne at 7:14 AM

I've heard of this one but wasn't exactly sure what it was about. Sounds like a neat book.


--Anna
Diary of an Eccentric

Oh my gosh, but that sounds hilarious! Thanks for the review.

Hahaha, nice! I've heard about this but never knew what it was about.

I have this on my TBR pile. Loved your review.

Aw! Sounds cute! I might have to see if my library has it.

I had been eyeing this book when I read a bit about it from Harper Collins newsletter. So glad you wrote a review!