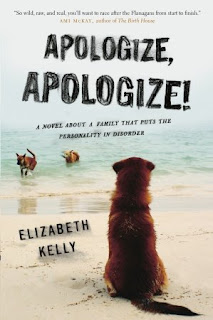 Apologize, Apologize is the debut novel from Elizabeth Kelly, one of Random House Canada's
New Faces of Fiction.

This is the story of Collie Flanagan, his brother Bingo (both named after dogs, breaking the family tradition of naming boys after birds) and their chaotic, quixotic family. The boys live in Martha's Vineyard with their mother, father and his brother, Uncle Tom. The family does not have to worry about money, as their grandfather Peregrine is very wealthy. Collie is the antithesis of his immediate family - he wants to have a job, education and plans for the future. Bingo is opposite in every way. A simple day's outing for the boys turns into tragedy and further damages an already unstable family.

I found the subtitle - 'a novel about a family that puts the personality in disorder' and on the flyleaf - 'Welcome to the world of the fantastic Flanagans' to be somewhat deceptive. I started reading expecting some family disarray and problems, but in more of a light hearted manner. I was unprepared for the cruelty and madness that is Collie's mother and the unconcern of his father. Bingo is the favoured son and Collie has been made very aware of it.

'His magic expressed itself in many ways. I wouldn't have minded a little of what he had. There was no magic in me."

The unspoken love shown by Uncle Tom towards the boys is somewhat redeeming. It is this character that I enjoyed the most.

The Flanagan household is loud, tumultuous and boisterous. The conversations between family members are rambling, but strangely logical. They go every way but what you would expect. Kelly masterfully creates a sense of chaos with a cacophony of words and unexpected views.

" Tom once vanished for a day and a half trailing his crabby old cocker spaniel Fagan around the island - I was well into adolescence before I realized that other people actually made the decision for their dog about when to end the walk and not the other way around.

Many of the scenes were emotionally painful and hard to read. I felt that some of the later plot lines, taken to San Salvador and Ireland seemed almost removed from the first part of the book. They are part of Collie's journey but I found them somewhat disconnected from the earlier character driven chapters. The ending is somewhat ambigous and anticlimatic and left me feeling unsatisfied. This was a poignant, magnetic read, one I'm glad I undertook. Definitely not your cookie cutter book. Have you read it yet? What did you think?
Posted by Luanne at 8:09 AM

I haven't read it yet, but it's sitting waiting for me.

Your descriptions of the strangely logical conversations and a story filled with chaos intrigue me. Great review!

I had thought this was a funny family type story too Luanne when I had read about it. I guess not. I'm kind of on the fence with this one.

Those poor kids! And what's up with the odd names? I bet they got teased in school...

I couldn't finish it. I have a hard time enjoying books with lyrical prose and flowery metaphors, and this book had tons of them. I always feel guilty after abandoning a book, but it would have taken me weeks to force myself through it :(

I haven't read this one, but after reading your description, I certainly want to!

Thanks for your review, I hadn't heard about this book before now.