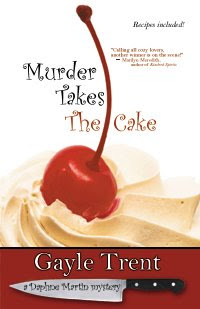 Middle aged Daphne Martin moves back home to small town Virgina to start over after her marriage ends. She settles in and opens 'Daphne's Delectable Cakes.' She is delivering her third attempt- a spice cake with cream cheese icing - to Yodel Watson. Her previous two cakes have been rejected by hard to please Yodel. However, Yodel won't be rejecting this cake - she's dead. Is it murder or natural causes?

Yodel was the town gossip and kept track of everything in a diary. Yodel's out of town daughter asks Daphne to pick up the diary from her mother's house for her.

'Mother kept a diary - a virtual tell-all of the happenings in the community. If someone killed her , the reason why is in that book".

This stretches believability a little bit. If that's the case, why not give the book to the police?

In any case, Daphne does pick up the book and begins to read it. She discovers much more than she had bargained for. Her family is mentioned in the book, along with half the town. It looks like a lot of people had motives to kill Yodel - including her own family. And half the town thinks it was Daphne's spice cake that killed Yodel! So Daphne sets out to clear her name.

The folksy names, dialogues, settings and characters all promise a good cozy (culinary) mystery. This was an easy, entertaining read. It reminded me a bit of a comfortable, enjoyable game of Clue. A second in this series - "Dead Pan" is already in the works.

Murder Takes the Cake was a semi-finalist in Amazon.com's Breakthrough Novel Award Contest.
Posted by Luanne at 7:29 AM

Sounds like a fun read to me, since I love food and books.

I like books like this, M.C Beeton's agatha Raisin books and Charlaine Harris's Aurora Teagarden are cozy little murder mysteries too if that's your thing.

This sounds good. I love these kinds of books-this reminds me of the Joanne Fluke series. Have you read any of those at all? I love them.

I've read some of Dianne Mott Davidson's too- I like them.

This sounds fun! Thanks for entering my giveaway.