No Such Creature - Giles Blunt 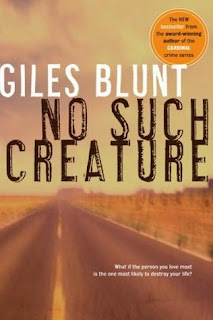 I have long been a fan of Canadian Giles Blunt and his John Cardinal crime series. Blunt is another one of those authors I just know is going to be a good read.

I was surprised to find that this was not part of the series, but a stand alone book. After the first twenty pages I was hooked and could not put it down.

Owen has been raised by his great uncle Max since he was orphaned at twelve. Max is a failed thespian, but is a very accomplished but genteel thief. Owen is now eighteen and their road trips across America robbing rich Republicans have honed his skills as well. Using acting skills, disguises and charm they have so far steered clear of violence. Owen is thinking of packing it in after this summer to attend Julliard and study drama. He plans to tell Max soon. It is in Vegas that things start to go sour. There is a shadowy legend among thieves about a gang called the Subtractors - mysterious men who steal from other thieves and use whatever means necessary to get what they want. And it looks like they want the riches from Owen and Max's last job. On the road with them now is Sabrina, the daughter of a former 'associate' of Max, who is running from a problem as well - named Bill.

As Sabrina says "Living with a criminal - or being one - is like living on the Titanic. You just know it isn't going to end well."

This is a story that grabs you and just doesn't let go. I kept turning pages well into the night. The plot is great but it is the witty dialogue and characters that stand out for me. The character of Max fairly leaps off the page, larger than life. Max's soliloquies, his manner of speech and pronouncements on life are funny yet poignant. Although we know they are thieves, Max's gang - including the trivia obsessed Roscoe and Pookie - are likable and Max, though flawed, is lovable even. Certainly he loves Owen.

This is a story of larceny, love, heartache, humour and life. Definitely not your typical crime story, but boy is it a good one!
Posted by Luanne at 7:32 AM

That sounds like a good one. Thanks for the review!

Looks exciting! I will have to check it out.

I love the John Cardinal series too - I can't wait to get a copy of this one. Thanks for the great review!