All the Colours of Darkness - Peter Robinson 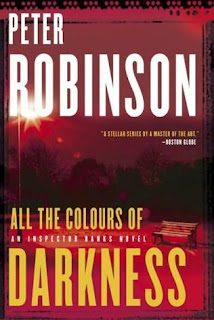 Ohh, it was with great happiness and anticipation that I settled in on the couch with All the Colours of Darkness, newly released from McClelland!

This is the 18th book in the Inspector Banks series from Peter Robinson. Every last one has been a great read and this one was no exception.

The series takes place in England and has followed the career of Alan Banks and his co workers. Just as interesting is Banks' personal life. Over 18 novels, it has been fascinating to follow the progressions of the character's lives. It gives such a realistic note to the books and makes the characters even more believable. Banks' fondness for listening to all types of music has more than once sent me on a search for a CD, just to hear what he has described.

Annie Cabot's (Banks' partner and ex-lover) latest case appears to be a suicide by hanging on a school property. However, when she finds the man's lover bludgeoned to death, Banks is called back to work from a weekend away. The case takes an even more curious turn when one of the victims is discovered to have worked for M16 - Britain's Security and Secret Intelligence Services. Even more curious is the speed at which the case is declared closed. Murder suicide - the end. Bank's supervisor, Inspector Gervaise, insists on him taking some time off and to accept that the case is closed. While agreeing, Banks decides to investigate further on the sly and enlists the help of Annie Cabot and Winsome Jackman. And they do discover more....

This case borrows from current headlines and as always is an intelligent mystery.

There is just something comforting about settling down with a Peter Robinson. I never bother reading the cover notes anymore - I just know that I'm in for a really good read. If you haven't yet discovered this award winning series, I encourage you to. They don't need to be read in order - each book is a great tale on it's own.
Posted by Luanne at 5:21 PM

What a nice review. I find myself being drawn towards good mysteries more and more these days. I'll head off to Amazon and pick up one of the series!