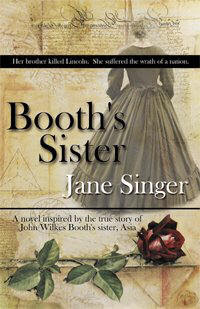 Singer first came upon two photographs of Asia Booth Clark and the story she wrote about her brother, John Wilkes Booth, published in 1938 as The Unlocked Book. Singer felt the need to know more about Asia and has written this fictionalized account exploring Asia Booth's life.

Nearly everyone (including us Canadians) can tell you who shot Abraham Lincoln and where. Beyond that I didn't know too much. Booth's Sister is a fascinating look at the life of the sister who was left to deal with the aftermath of the assassination.

The book opens with the statement:

"My brother killed Abraham Lincoln. That is my weight, my shame."

From there we travel back to relive their childhood, from Asia's viewpoint. Raised in rural Maryland with an often absent actor father who insisted that Shakespeare be part of everyday life, the two youngest Booth children embraced the theatre. The freed black woman Gillian seems to have been a much stronger force in her life than their own mother. Inklings of Johnny's political leanings are hinted at in his childhood.

I found the first part of the book a little confusing. Singer has taken great literary license in imagining their days. Asia seems to want to be her brother. Lots of Shakespearean quotes and references let us know how great a role the theatre plays in their lives. But I sometimes had to read pages two and three times to understand what was real and what was imagined.

The second half of the book, their adult life, captured me more. It seemed more grounded and readable. Asia still longs to be a man and particiapate in the theatre. Her brothers are celebrated actors and she longs to be on the stage with them. Instead she enters a loveless marriage, but continues to help her brother with his plans to bring down Lincoln's government. 'Johnny' commits his crime and Asia's life is forever changed.

There are two monologues- " Voices From the Time of the Assassination" at the end of the book that I found to be excellent. I enjoyed them almost as much as the book. I love the idea of fictionalizing history and Singer has done an admirable job of bringing to life a lesser known figure from the past.
Posted by Luanne at 7:33 AM

Now this is a nice find....I hadn't heard of this book. It's going on to my wishlist now -- you don't see much American historical fiction these days. Thanks for the nice review!

In your opinion is it well-written in terms of grammar, prose, etc.?

I think I can deal with the first part being confusing as long as it's good prose.