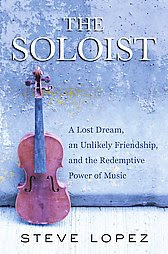 A Lost Dream, an Unlikely Friendship and the Redemptive Power of Music.

Steve Lopez writes for a Los Angeles newspaper. One day he hears someone playing violin in the street. It is an older, disheveled obviously homeless man playing a violin with only two strings. He stops to listen, as the music is beautiful, speaks the man and heads back to the paper to write a column about the homeless violinist. And so begins an unusual relationship.

The violinist is Nathaniel Ayers. He was a very promising musician in his youth, winning a scholarship to the prestigious Juilliard School. Although he excels, his ends up dropping out his second year - he is diagnosed with schizophrenia. He spent the next 35 years on the streets, still in love with music. Lopez becomes caught up in Ayer's life, determined to help him back into mainstream society. Along the way he discovers that his idealistic goal is not reality. Nathaniel is mentally ill. Ayers declares that he is happy with his way of life. The next two years are a fascinating story as Lopez spends nights with Nathaniel on Skid Row, fending off sewer rats with sticks and traverses the minefield of mental health issues, problems and solutions. Nathaniel becomes not a project but a friend to Lopez.

The Soloist was born from the series of columns that Lopez wrote. It is a fascinating read and should be a great movie as well. Slated for release in November 2008, it will star Jamie Foxx and Robert Downey Jr.

The preview for this movie looks fantastic so I've been thinking about reading the book. Thanks for the review!

wow...I need to read this book. I'm a violinist and seriously considered making a living off of it during high school, plus have a pretty bad history of mental illness in my family...thanks for the review