Thanks for the Memories - Cecilia Ahern 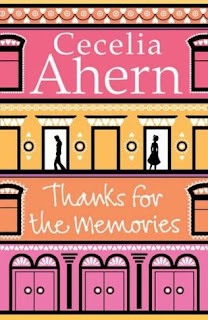 I had never read Cecilia Ahern's books before, but had just watched the movie made from her first novel, the best seller P.S. I Love You. I totally loved the fairy tale quality of it. A definite chick flick.

Thanks for the Memories was released by Harper Collins Canada earlier this year.

Justin Hitchcock has moved to England to be closer to his daughter, after he and her mother divorced. He travels to Ireland to work as a guest lecturer at Trinity College. It is there that he is persuaded to donate blood for the first time.

Back in England, Joyce Conway suffers a serious fall that results in a hospital stay. She needs a blood transfusion. Joyce starts having memories of things that have never happened to her. Hmm - see where this is going?

I enjoyed the characters of Joyce and her friends. They came across as realistic. I was not so taken with the character of Justin. Although he is the 'romantic' lead in the story, I just never really bought it. I found him to be rude and boorish and he just never redeemed himself in my eyes. But it is Joyce's father Henry who steals the show. He is a the only parent Joyce has left. He is elderly and set in his ways. He has never travelled much beyond his neighbourhood. His views on just about everything provide laughter but tears as well. This is the character I engaged with the most.

The dedication in the front of the books is to her grandparents and includes photographs. I could see her Grandfather Ahern as Henry.

Ahern has a new book coming out later this year for Christmas.

This is a great chick lit read. Fans of Sophie Kinsella and Meg Cabot will enjoy this author as well.
Posted by Luanne at 7:18 AM

I also liked Joyce's dad, their shenanigans together were fun.