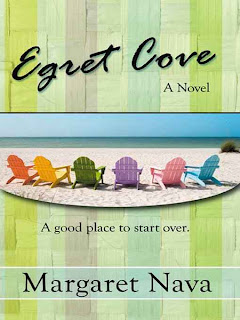 Covers always catch my eye. This cover is very appealing. Bright and inviting - just makes you want to sit in a chair and watch the ocean doesn't it?

Egret Cove tells the story of Angela Dunn - a sixties something divorcee from Kokomo, Indiana who packs up her dog Gizmo and moves to a Florida retirement trailer community. Her brother lives there and has offered her a job with his pest control business.

The subtitle -'A good place to start over'- describes the jist of the novel. Angela is looking for more in life - although she's not always aware of it. At the trailer park we are introduced to many of the other residents, including the dashing, single Gilberto and full of life Katherine. Katherine is a member of the Foxy Ladies - pretty much the same idea as the Red Hat Society.

Although Angela is going through some upheaval in her life which could explain her behaviour, I just didn't quite bond with her. I found her to be a bit mercurical - rude, abrasive and cynical at times, then naive and shy. I found the character of Katherine to be more my cup of tea. She is ready to embrace and experience life and has a wonderful outlook.

I would place this book in the "hen lit" category. Light hearted but appealing to older readers. There are references made that will pass over younger reader's heads. "...Esther William's bathing suit..."and a few others.

I believe Nava has a great idea for a series here - there are plans for at least two more Angela and Gizmo books - and with more fiction experience the story will not seem quite so forced.
Posted by Luanne at 7:47 AM