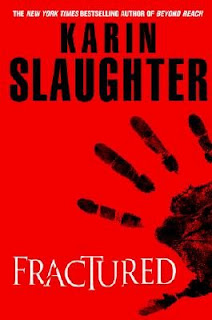 Fractured is the second in Karin Slaughter's Will Trent series.

Trent works for the Georgia Bureau of Investigations. The GBI is called in to work on a case with the Atlanta police. Trent isn't too popular with the APD as he investigated and convicted a number of dirty cops. He is a highly effective cop, hiding his illiteracy from all but his boss.

In a well to do neighbourhood, a mother comes home to find her daughter lying in a pool of blood with the murderer standing over her. She kills the attacker. Trent and the girl's father have a history as well. But there is a second girl missing. Trent is forced to work with Faith Mitchell, a detective who has her own reasons for hating Trent.

Slaughter writes tight thrillers with unusual characters and unexpected twists. This one kept me engrossed right to the end.

Slaughter also writes another good series - Grant County - featuring a small town coroner and her husband the chief of police.
Posted by Luanne at 7:13 AM

Ooh, this sounds good. Definitely going to check Fractured out. I'm on a bit of a thriller kick lately -- when autumn rolls around, I want to curl up with something creepy.