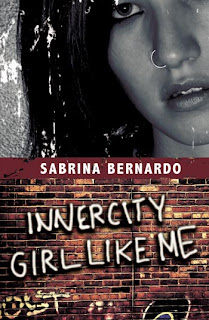 Released earlier this year by Harper Collins Canada,
Innercity Girl Like Me is a frightening, fascinating look at gang life in Canada.

Set in Winnipeg, Manitoba it tells the tale of Maria who survives her gang initiation - being beat on by four people for five minutes and not crying - and becomes know as G Child of the Diablos. At the age of thirteen.

This is a gritty look at the desperate, dangerous world of 'thugs'. At nine and ten years old, they are hero worshipping the older members, wanting to be just like them. Poverty, all types of abuse, poor parental relationships and above all, a need to belong seem to drive many young people to this life.

G Child becomes immersed in a world of drugs, alcohol and danger, where loyalty to your colours supersedes all else.

The shooting death of a friend at fifteen triggers some doubt - but not enough to leave the life.

"I didn't think it was going to be the last time I'd see him. It's almost like, I don't know how to put it, a waste of a life."

She progresses to dealing drugs and a rift develops in the gang. The focus changes for some, but not all.

"It isn't about representing the Diablos anymore. It's about filling your pockets, right?"

Life for G Child and her gang seems to spiral out of control, leading to a final drastic conflict.

Althought this book is marketed as fiction, it reads more like a biography. Bernardo herself was never in a gang, but associated with one in Winnipeg. She has witnessed what she writes about. This is a young adult novel, definitely meant for those 14+, but adults will certainly gain much out of reading it - perhaps with their teen.
Posted by Luanne at 7:49 AM