Confessions of a Contractor - Richard Murphy 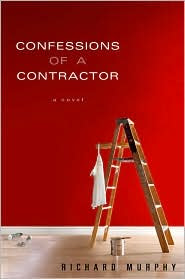 Confessions of a Contractor is the debut novel from Richard Murphy just released last month from Penguin.

I must admit that my initial impression from the cover shot was that 'Contractor' would be a sexual romp through the desperate housewives of Renovation Lane. I was pleasantly surprised to be proven wrong. Yes there is sex, but that's not the main thrust of the book.

Henry is a contractor to the wealthy of Los Angeles. For the most part, he dodges landmines as some of his wealthy women clients do have more than renovations in mind. Henry acts as a sounding board, a shoulder to cry on and reads his clients well. In fact he states that:

"The first thing a woman needs to know about renovating a house or apartment is simple: do not, under any circumstance, sleep with your contractor, no matter what your husband or boyfriend is doing to you or not doing to you"

But one summer he takes on two houses at the same time and falls in love with both women owners. The ensuing story is about love and friendship told with a healthy dose of humour. The supporting characters are well drawn and believable. His friend Bill steals the show when they are together.

Murphy himself worked in the renovation field before working as a screenwriter. 'Contractor' is told in the first person and is filled with lots of advice and humorous situations that have to be the product of experience. It is a fun,enjoyable read that went deeper than the cover predicted.
Posted by Luanne at 7:23 AM

Based on the cover and description, I thought it might be a bit heavy on the sex scenes for my taste, but I've been reading nothing but good reviews about it. I think I'm going to have to get this one.

Hey.. I decided to participate in the bloghopping challenge hosted by Alpha Heroes. I started from the BBAW list and decided to come to your blog first. I am glad I did. I like your blog and I found the review of this book particularly interesting.:)