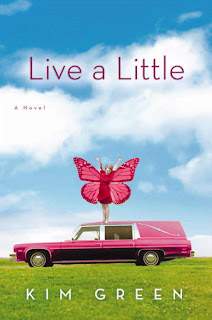 Live a Little by Kim Green was released last month by Hachette Books.

Raquel Rose is a harried housewife with two teenagers who take her for granted and a rather distant husband. When she receives the news that she has breast cancer, her family does an about face. Her kids start helping out with the housework, are thoughtful and her husband is being attentive. Raquel appears on her sister's successful television show ' Living with Lauren' and raises a lot of money for breast cancer.

The trouble is that at her next doctor's appointment, she gets the news that her test results were mixed up with another Raquel and she does not have cancer.

Stunned, Raquel goes home and tells her family the good news. Or tries to - they don't believe her, they're sure she's just putting on a brave face. In the end she decides to go with the lie. After all, she raised $250,000 so far...and this would be a chance to turn around her life and reinvent herself.....and her family is being so good to her......and ........

Well, you can see there might be a problem with this. Does she get caught out? I won't give away anymore, but you are in for a comical read. Green's descriptions of people, places and situations are laugh out loud funny. Her fantasies of Viggo Mortensen, her overachieving sister, her best friend and the local society ladies are hilarious. Once in a while it seems to escape and go a wee bit over the top.

At first I was a bit wary of the premise - pretending to have cancer? The women battling cancer in the book are depicted as strong and use humour as one of the weapons in their fight. And although this deception is what gets Raquel into her predicament it's as much a story of family and finding love.

There are some mild sex scenes that some readers may either enjoy or not. All in all a good chick lit read.
Posted by Luanne at 8:51 PM

I want to read this book!

Regarding the comment you left on my blog: Yeah, my reading tastes are all over the board LOL. I will read just about anything. I'm not so much into romance though, don't know why. I will probably be reading the kind of books you like as well, who knows :-). Basically I read whatever catches my fancy. I'm so glad you are reading my blog. I have your blog bookmarked so I can keep reading it.